Writing: The Road that Took Me

The road that took me. I can’t say that I’ve never known a time when I wanted to be a writer, but I do remember a day in the eighth grade when I wrote a story about a metalworker fashioning a helmet for the soldiers of Julius Caesar’s army which so startled our teacher that she read it aloud to the class (which is not to say it was any good), and even in childhood I tended to believe there were the creative arts and then merely things one did to get by (never mind the fact that the latter absorbed the lives of most of us). I definitely had a romantic view of the arts. Books in my early years were associated with the ideas of exploration and travel, either through the wonderful tales of Mary Renault (set in ancient Greece), Henry Treece (endless Viking yarns), Mika Waltari (The Egyptian and other works) or Gore Vidal (ancient Rome or his series set in 18th and 19th century U.S.), or through the science fiction of Damon Knight, Robert Heinlein and others. There was a clear escapist bent in these choices. A growing conviction also took shape that not only could one examine past and future worlds through fiction and biographies, but to the extent possible one should do one’s own travels in the physical world; that is, one should be one’s own Ibn Batuta, Ibn Khaldun, Admiral Zheng He, or Sir Richard Burton. Accordingly, admittedly not quite on the scale of the great travelers mentioned above, a current submission to the Red Wheelbarrow Writers’ anthology pertains to a student days’ drive through Turkey.

Lao Tsu said one should be like a child, which I took to mean maintaining a sense of wonder and excitement in discovery, or as Heraclitus cautioned (as usual in a difficult and paradoxical way): “Only those who expect it will discover the unexpected.“ Of course, submitting stories led to repeated rejections and pain, and in real travel there were also risks – one might come back ill or not come back at all, but it seemed that in order to write interesting things one had to try to live an interesting life. Or again, explorations needed to proceed both intellectually and in the physical world; cursing over the 2000 Chinese characters one needed to read the newspaper, being eaten alive by mosquitoes in the student hostel west of El Alamein, opening with dread but nevertheless opening Perry’s Sanskrit Primer, and so on.

As time went by, one might have hoped I would have outgrown the reverence for writing, but experience in the workaday world only solidified it, and the habit of writing refused to go away. Stories are still rejected, loved ones formerly besieged by boxes of manuscripts now cringe at e-attachments and memory sticks. There has been no end to it. To be sure there have been stretches of time (some of them considerable) where no projects were underway, but fingers continue to return to the keyboard.   I would probably say as many others have in the past: I don’t have the desire to write; rather, the daemon of writing frequently has me.

In 2010 I was in a meeting in an Asian city with my superior and a hundred colleagues. My new manager said graciously, “And we want to welcome Ken to our location.” I was advised this was something she always said. Okay fine. But then she added, “And he’s a writer too!” “Not a very successful one,” I admitted to the group. “But thank you.”

The main thing is to persevere. 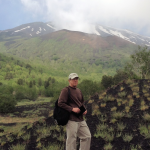 Kenneth W. Meyer writes general historical fiction, short stories and academic items related to his longstanding interest in China and the Middle East. He spent most of his adult life abroad, starting with study in Egypt and Taiwan, and with his wife May currently divides his time between the Pacific Northwest and Hong Kong. He is thankful to be in Washington State and in one piece.