An old envelope fell out of the piano bench the other day, and I asked Bill about tossing it out. But its scratch marks held details of his 1989 trip to collect what is now our good, heavy, rather old upright piano. The trip was a December adventure, and a leap of faith, since a piano is a formidable opponent for someone going alone, with a not-good back, the six hundred twenty miles to Redding, California.

The seller wasn’t there at the appointed time. No one had cell phones in those days, and Bill was left to wonder and linger over a long breakfast until, 90 minutes late, the fellow pulled up, having finally made his way through fog-obstructed traffic.

A professional mover, he waved away Bill’s help. Actually asked him to stay out of the way. He had a solid block constructed of layers of sheet plywood, about 15 X 15 inches square and about nine inches high. Onto this block he set the piano on its side, and from there choreographed a dance of tips and pivots. In about five minutes he had the piano down from his truck and into the back of Bill’s rented trailer.

Now, no one is going to confuse a neat, five-minute piano-moving trick with the long slog we face as we do the work of, among other things, defending our open and welcoming society. But what I take from the piano mover is this hope: that when I’m trying to move a seemingly immovable hulk of problems, distrust, and ill-feeling, and I’m straining, that there may be a better way.

One way my piano surely becomes harder to move is if I fail to recognize all my allies in changing the public stories we hear, especially unexpected allies. Often enough I have used the simplified term “The Christian Right.” But this term doesn’t seem as meaningful as I thought before I saw Danny Westneat’s January 29 column (Seattle Times). From his column I learned how distraught the workers have been at Washington state’s largest refugee resettlement program, a charity of a coalition of mostly evangelical churches identifying conservative. They take large exception to the Administration’s assertion that immigrants have been coming in unvetted. And they love the immigrants they’ve been able to help, most definitely including the Muslims. Seeing this gave me goosebumps of joy.

One way my piano may be easier to move is if I can make music as well as generate sweat. We are not just in a historical moment that we can resolve in the near term. While our current crises are a special class of danger and damage, I think we are all recognizing that we’re in the midst of an upheaval that’s already been going on for decades and now shows no signs of resolving into peace in my lifetime, or maybe yours. So why not build our resilience with joys as well as activism? Joyful activism, if we can manage that. Continue to make music. And in writing my lyrics, I’d like to try this: using words like gains and setbacks instead of wins and losses—I think that will send the message to my bones that this effort is going to take endurance. And that my emotional ups and downs can be smoothed by letting go of winning. This isn’t a sport to me, anyway. Nor a war.

The late Hugh Prather once spoke of a growing family whose strength lies in their gentleness and whose message is not so much in their words as in their treatment of others. I hope to carry that thought with me, at least in my better moments, whether I’m pushing or waltzing. 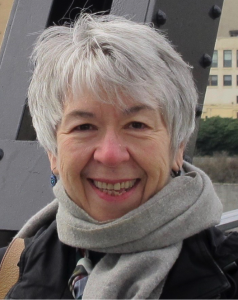 Jean Waight, formerly with Group Health Cooperative’s Communications and Community Relations department, is a Bellingham writer of memoir, short fiction, and essays. Her work has appeared in the Red Wheelbarrow Writers anthology Memory into Memoir, in “Cirque: A Literary Journal for the North Pacific Rim,” and in the sociological journal, “Research in Social Stratification and Mobility.” More blogposts are on GreenTeaSympathy.blogspot.com.