You may remember Laura Rink’s first Resistance blog on Ignorance in which she sought “to understand my fellow Americans better,” those individuals who were other—not white, straight, or middle class as she is. She developed a substantive list of ten books.

Like Laura, I seek to deepen my understanding of others, to seek connection, and to have empathy. A whole lot of Americans, including members of my own family, voted differently than I did. To me, they are “other.” And that’s why I requested and picked up the following book at the South Whatcom Library: The Making of the President 2016.

Subtitled “How D______ T____ Orchestrated A Revolution,” and authored by a conservative political strategist who played a significant part in electing Richard Nixon and Ronald Reagan, Roger Stone’s tome was an unlikely volume for me to tote home.

I am reading a book by a man who has written for Breitbart and Fox News, and who has been banned by CNN and MSNBC for his “politically incorrect” criticism of Bill and Hillary Clinton. Roger Stone is a guy who says the reporting standards of alternative media “are superior to the networks and the cable news behemoths.” To get a feel for who he is, watch this interview by Charlie Rose on CBS News.

I am reading a book by the author whose provocative tiles include The Man Who Killed Kennedy, The Case against LBJ, The Bush Crime Family, The Clintons’ War on Women, and Nixon’s Secrets.

On election night, so many of us were gobsmacked: “How could this have happened?” Roger Stone provides his answers, divided into three parts, in The Making of the President 2016 (362 pages):

(In writing this review, I have broken Red Wheelbarrow’s rule to avoid the name of the current president, but omitting his name from the title and headings of Stone’s book is unacceptable to this librarian.–The RWB webmaster made an editorial decision to blank out all but 45’s initials above)

I read with respect for an author who provides thirty (30!) pages of well-researched endnotes and for a writer who has contributed Op-Ed pieces to The New York Times. Yes, Stone is politically my opposite, but what he writes contributes to my understanding of those who voted for an individual I do not respect.

The election of our current president moved me, a newbie to the activist movement to Do Something! My wife and I marched in the Bellingham Women’s March. Then we joined Whatcom Undaunted, a newly formed group founded by Betsy Gross, one of dozens of groups under the Indivisible umbrella.

I lean on the twenty-five smart, involved women who meet every three weeks to have study sessions, share information, and promote action. You can check out our website built by Sue Ming and myself under Pam Helberg’s leadership. Work on the website has been my main contribution so far, but I have upped my attention to the League of Women Voters material and meetings and I strongly believe the quotation emblazoned on our website (“A leader once convinced that a particular course of action is the right one must be undaunted when the going gets tough.”—Ronald Reagan) and the description of our group: “We are a group of energized women dedicated to generating positive change.”

The act of resistance, too often heavy on pushing back, fighting back, and counteracting, necessitates forward movement, especially by those inclined toward the creative arts. As Toni Morrison said:

“This is precisely the time when artists go to work There is no time for despair, no place for self-pity, no need for silence, no room for fear. We speak, we write, we do language. That is how civilizations heal.”

The writers in Red Wheelbarrow already knew that. That is why we publish a Resist essay every week. 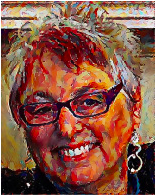 Author’s Bio: Linda Q. Lambert is a retired community college library director, a recent graduate of the Stonecoast MFA Creative Writing program at the University of Southern Maine, the mother of four sons and three daughters, and grandmother to thirteen. She also holds a masters degree in Journalism from the University of Southern California and one in library science from Emporia State University. She’s working on a bio-memoir of George Reuben Anderson, a civil war vet and her great grandfather.

She inserted the initial Q in her name to honor the Quinbys who adopted her and to eliminate the alliterative overkill of Linda Lee Lambert. She is married to Amory Peck. Linda blogs at lindaqlambert.com