The Art of Silencing 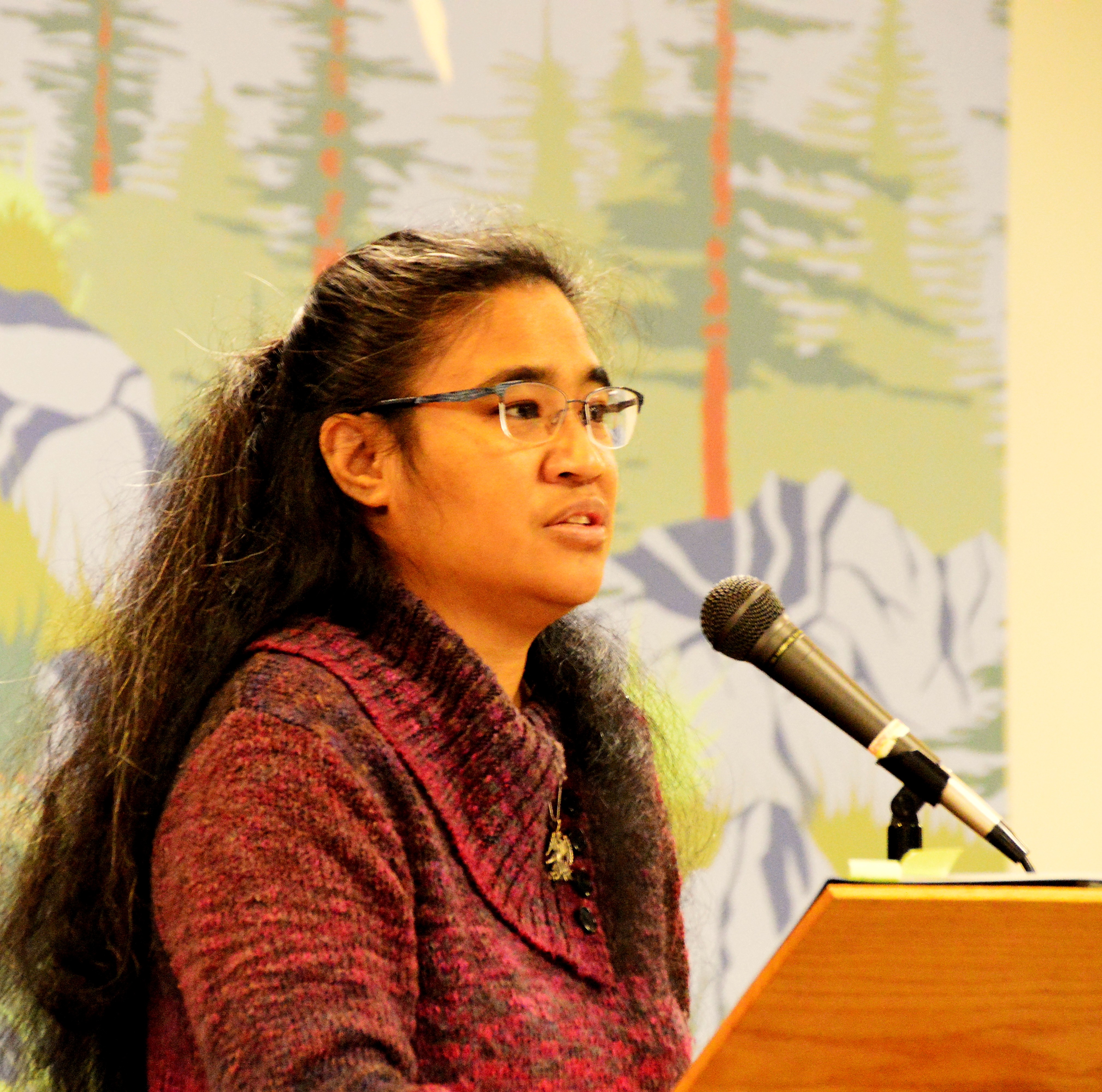 “I would have written a shorter letter, but I did not have the time.” – Blaise Pascal, 1656

For poetry month in 2015, I decided to do a series of redaction poems. My writing practice felt dry and uninspired, and my time was limited by a full-time college teaching position, academic leadership responsibilities, and the usual tasks of a wife and mom of two teens. I lacked the discipline I thought would be required to find and craft words into readable poems on a daily basis. As a teacher of composition, however, I already had my editor’s skills in the forefront. It seemed natural to take existing prose pieces and redact words to create poems.

The plan was simple: find a random passage from a book plucked from a shelf wherever I found myself. At home, cookbooks and gardening manuals were likely targets. At my college office, style manuals and books on culture were the norm. At the tutoring center, books on science and math dominated the shelves. Every book was fair game and the only criterion for choosing a passage was whether a word on the page caught my attention. Passages had to be at least five lines long and readable. 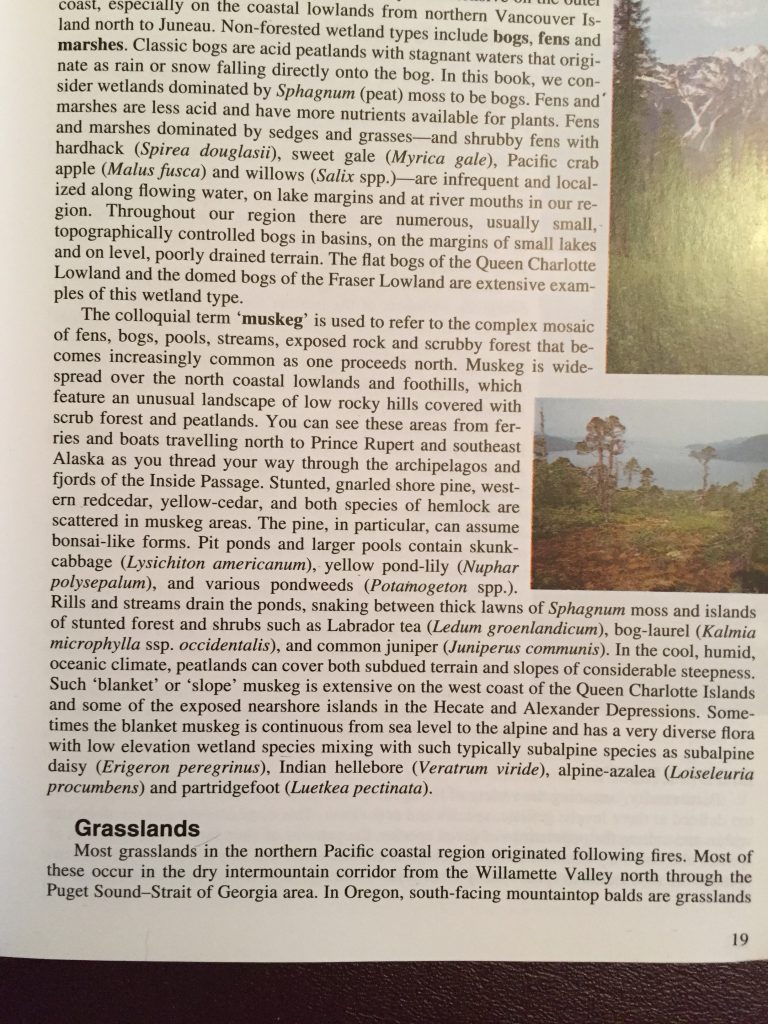 Once I found a passage, I copied the page, enlarging the text for readability. Then I took out my favorite Sharpie pen and went to work. I allowed myself to redact as many words as I wanted but required myself to leave at least one word per line. As the month went on, I found myself particularly attracted to active verbs and vibrant nouns. The practice became a game for me to find and keep the best, most interesting words. In the end, I would review the poem by reading it out loud and redact those few remaining words I thought unnecessary. More than once, I regretted the haste of my Sharpie that obliterated a word I would have rather kept. I resisted the urge to start over. The poems were trulyexercises of creativity, experimentation, and surrender. 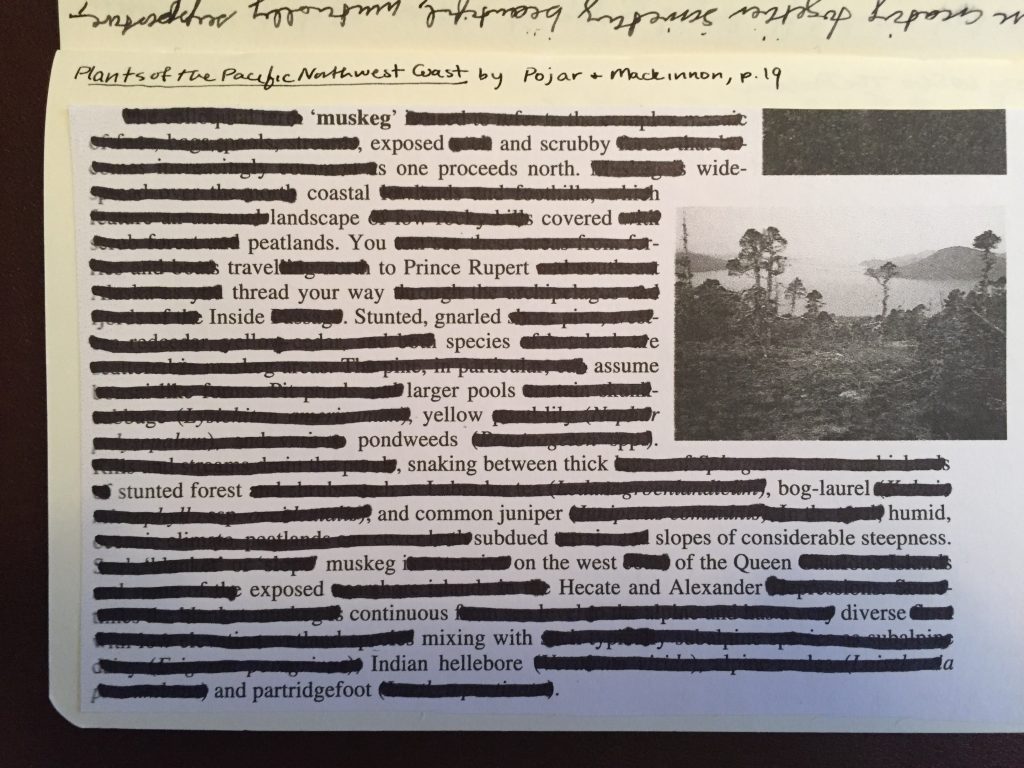 I posted pictures of the poems on my FB page and didn’t think I would do much with them after the end of Poetry Month. In early summer, though, a call for poetry submissions crossed my email and I wanted to participate. The familiar dread of not having the time or creativity to write new work came over me – then I remembered my redaction poems. I reviewed several, chose a few, combined a couple, and edited them further. 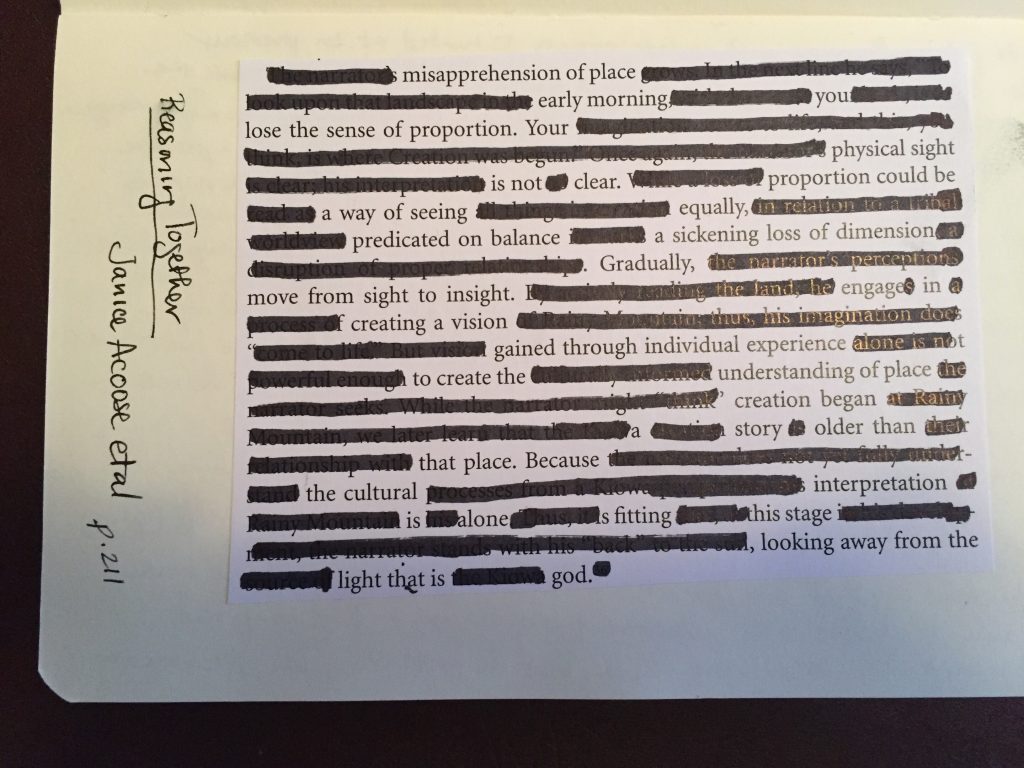 To my delight, one poem titled ‘muskeg’, a combination of two redactions, was accepted to the anthology Noisy Water: Poetry from Whatcom County, Washington.

proceed north along the wide

thread your way, stunted and gnarled,

between thick forest of bog laurel and

common juniper in the humid,

Seek muskeg to the west like the Queen, or

Hecate, or Alexander. Find the continuous

Tangle, diverse and mixing with Indian

Misapprehension of place, sense of proportion

Lost. A way of seeing predicated on balance.

Move from sight to insight. Create a vision,

an understanding of place.

Creation began a story older than this place,

looking away from the light

Redaction poems are similar to found poems in that they reflect the idea that art can be found in the most mundane, unexpected places. Redactions, however, seek to show that a silencing has occurred; if you look closely enough, the missing can be found again. Although my poems began as redactions, they became found poems in the final edits because the redactions are not visible. Ultimately, the poems I wrote in 2015 reflect my own continuing conversation about silences, something of deep concern in this post-2016 election time. People like me are in fear of being silenced in subtle and violent ways. We fear our histories will be blotted out with black marks of denial and revision. This is one way to look at the future.

The possibility redactions represent culturally, though, is the sense of what was hidden has been revealed. Things overlooked and unseen are voiced because the noise of the expected is silenced. Ideas can find new connections, much like we allies and advocates can find each other to work for a better world despite the shadow that rises before us. 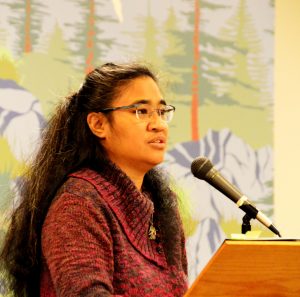 Rebecca Mabanglo-Mayor’s non-fiction, poetry, and short fiction have appeared in print and online in several journals and anthologies including Kuwento: Small Things, and Noisy Water: Poetry from Whatcom County, Washington. Her poetry chapbook Pause Mid-Flight was released in 2010 and her memoir of identity and motherhood titled Long Way ‘Round is in development.