Helena and Karuna age eleven, played soccer with the boys in their school. But the boys would not let other girls play, as they did not think they were good enough.

The girls complained to their teacher Esther and she decided to have a debate in class.

“Today we are going to discuss the way the fields are divided as the girls do not feel it is fair. The boys have four different ones and the girls have none. What does everyone think?

“The girls don’t know how to play boy games, so why should they have access to the fields?” Miguel said.

“If you’d let the girls play, they would learn,” Helena said.

“It’s always been this way; the girls play other games,” Santi said.

“Maybe it worked for other girls, but we want to play soccer, volleyball and basketball,” Estela said.

“We are the boys and we decide. In my house, the man decides,” Juan said.

“Well, there is no man in my house and my mother decides, so your logic does not apply to me,” Karuna said.

“We live in Spain, and that’s the way it is,” Antonio said.

All the girls voted in favor, so the teacher made a schedule to divide the fields.

On the first day, the girls played soccer the boys began interfering in their game. Making fun of them, kicking the ball and laughing. Helena and Karuna got into a rage and started grabbing boys by their t-shirts and throwing them off the field. Helena was the tallest and strongest in their class even amongst the boys, but they were surprised by Karuna’s strength as she was skinny looking, but due to all the bike riding, climbing trees and fighting with her brother Arcadio, she was stronger than she looked. Their friends Guillermina, Carmen, Estela, Carol, Veronica, Lali, Noelia and Ava started to throw the boys off as well. They got into pulling hair and scratching faces and finally a teacher came to send them all off to the head mistress’s office.

Maria, the headmistress, sat quietly with her short hair and asked the children to explain what had happened. They explained about the debate and what had been decided. She finally looked at the boys and said, “It only seems fair that the girls get to play in all the fields as well. Let’s try it for a month and as long as they are using the fields we will keep to the schedule.  Ok?”

“Okay” they all said. Maria was stern, but fair and everyone respected her.

From that day on the girls played in one of the fields every day and the boys respected the schedule. One day Melchior, Karuna’s brother who later became a professional soccer player, suggested they do an official match with two girl teams. With him as referee, they all met one morning on a Saturday in San Vicente and the first girls’ soccer match in the North of the Island was played in the year of 1986. They later played one more in San Jose in the South of the Island, as there were two girls teams there.

That winter Nick Arnold, Karuna’s grandfather sent her a poem about how brave and how fair she had been. It surprised her, as she had not thought it was such a big deal, she was just reacting to a situation that she thought was unfair, but through his eyes she saw her own brilliance.

Twenty years later Karuna walked down to the school in San Juan and saw the girls playing soccer. She asked them if they had always played and they said yes, they had begun playing in kindergarten. They now had teams and played against other teams. Tears came to her eyes, as she acknowledged how much had changed, not only in soccer, but in all areas of women’s life.

Spain continues to be a very sexist country, but there is more equality than ever before. The small efforts we make in our daily life towards fairness, can help the following generations. We may feel our power is small compared to others, but when we find allies, we can resist and change anything. 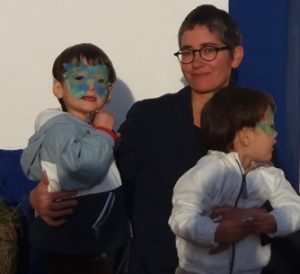 She looks forward to her boys beginning school in September, so she can have more time for her different writing projects; a couple children’s books, a blog and working on an historical novel  “Rosannah”, which takes place in the 1770’s in Pennsylvania and in Wales. She also enjoys writing in Spanish and has spent this year entering writing competitions in Spain and South America. In January two of her short stories “Otra Etapa” and “Blind George,” were published on an online journal www.escritores-en-red.es