Do you remember what you felt the week before the 2016 presidential election? As an ardent Bernie Sanders supporter, I still nursed some anger at the Democratic National Committee and the media, feeling they hadn’t given him the coverage they’d given Hillary Clinton, but, still, we were about to elect the first woman president. An historic moment! A glass ceiling hung poised above us all, waiting to be massively shattered. I remember watching the CBS pundits, running their predictive pointers across a red, blue, and purple map of the country, explaining all the possibilities that might be foreseen if this state went red or another went blue. His final words had been “Only a miracle could turn enough states red for a Republican victory.” Hillary’s landslide was assured; even the most unfavorable polls said so.

I joined my friends in planning parties to celebrate Hillary Rodham Clinton’s election as the first woman president of the United States of America. Three of us had even reserved a cabin on Orcas Island for our women’s victory weekend. Champagne, chocolate, beach walks, and companionship beckoned from our future.

I just want to take this moment to apologize for what happened next. It was my fault. Yes, honestly, it was all my fault! Let me explain.

On the night of November 5th, three days before the presidential election, I went to sleep in a familiar universe. I turned the heat down to sixty-two, took my evening vitamins, flossed my teeth, puffed my pillows, and snuggled down under my comforter. The cat jumped onto my bed as I turned out the light, curling his body into its usual position against my legs. Sleep came easily.

Three hours later I awoke from a soul-freezing nightmare. In my detailed and vivid dream, I sat at a long utilitarian table in an institutional green room. A group of us were awaiting the first deliveries of ballots that we could begin counting. A friend came rushing in from outside, visibly upset. “More Republican ballots are coming in than Democratic!”

Not believing her for a minute, I hurried out to the loading docks where ballots were arriving in large, flat white bags of heavy plastic, sorted by party. My stomach suddenly filled with icy lead, freezing me in place, as I realized that she was correct: more Republican votes were pouring into that small-town vote-counting place than Democratic.

The terror I felt jolted me into instant consciousness. The dream made no sense; everyone knew Hillary would win, but the vivid dream felt precognitively real. I feared that it foretold an unforeseen slip into an alternative universe, previously unknown and somehow malevolent.

For the next three days, I did everything possible to dispel the outcome predicted by that dream. How could I re-route the Universe, steer it away from that terrifying course? The man who originally seemed only to be a bad campaign joke, could not possibly take over the governance of my country! Everyone else seemed to continue as usual, confident of Hillary’s victory, unaware of the bifurcation of universes that I feared lay just ahead.

On the afternoon of the election, I felt even more certain that my dream had been an inexplicable premonition. Frantically, I pulled up every irrational superstition I could think of in an attempt to derail an unimaginable future.

If I wear different shoes this won’t come true.

If I don’t go to Leah’s to watch the returns this won’t come true.

If I don’t bring the bottle of my favorite port to her house this won’t come true.

History may record that the Earth changed course because

I did wear the shoes and

I did go to Leah’s and

I did bring the port.

Undoubtedly, the election of the forty-fifth president was entirely my fault: I had been warned. Megalomania has not been one of my usual faults but it continues to lurk here just below my consciousness.

This morning, as my first waking sensation, an inky sense of wrongness creeps into my consciousness. Reaching to snuggle my cat, I seek to retreat. If something so malevolent lurks in the waking world I will choose sleep. But my efforts defy me; consciousness is sending out a tentacle, ensnaring my thoughts, sucking them out into dawn. The man who ran a campaign based on anger and bigotry, despite everyone’s predictions to the contrary, has been elected president, and it is my fault.

So, I write this as an apology. My only sustaining consolation is that my friends have fallen into this alternative universe with me. If you are willing to forgive me, we will lock arms and wrestle this cosmic alligator back onto an appropriate track. Anyone know where to find a wormhole we might use to reboot reality? 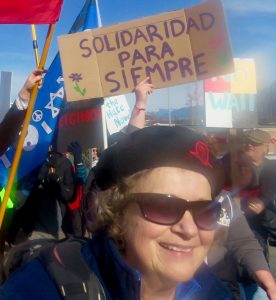 Author’s Bio: CAROL MCMILLAN, until the past few years, had mostly published in academic journals. But moving to Bellingham has brought her poetry and memoir writing out of the closet; she has now been published in several anthologies. Carol is the author of one book, White Water, Red Walls, chronicling in poetry, photographs, and paintings her rafting trip down the Grand Canyon. She is currently working on a memoir of her experiences during the 1960’s in the San Francisco Bay Area.