“She was warned. She was given an explanation. Nevertheless, she persisted,” Mitch McConnell said after invoking an obscure, antiquated rule to silence Elizabeth Warren on the Senate floor.

“Bullshit!” I responded when I heard what he’d done. I was angry, and taking it personally. Then I asked myself why, and realized that it WAS personal—to all women and girls. This is what I grew up hearing:

“Be nice, be ladylike. Don’t talk back.”

If I spoke up against unfairness, I was punished, and I learned to silence myself, like so many women around the world. It was a long road for me before I realized that the persistence of the old “power-over” models, perpetuated by patriarchy (our dysfunctional U.S. Congress, anyone?), depends on silencing powerful and thus threatening-to-the-old-order women. Why has my right-wing father hated and excoriated Hillary Clinton since her First Lady days?

My Resistance to tyrannical authority began with the stories and novels I write, in which plucky women freely speak their minds despite the dangers of doing so. In my early science fiction novel Wild Card Run, a young woman escapes her abusive stepfather and repressive homeworld in which women are required to stay in the home and denied the freedoms given to men. She lands on an anything-goes asteroid called Casino, only to discover that even there her outspokenness may result in punishment with the “Steps of Healing,” which would erase her memories and rebellious personality. She would literally be silenced.

I considered the novel allegorical, not literal, in regard to women’s rights. During my youth, the feminist movement had made great strides in gaining rights for women, and I had worked among men in industry. Of course, I had to go through hazing and working harder than the men to “earn” my right to be accepted on the work crews, but I prided myself on being tough and able to take it.

Then I moved to fairly remote Southern Chile, where my former husband and I had bought land to start a farm. I was startled to realize that in this rural area, women stayed in the home while men had the freedom to go out partying and do what they wished. I was never addressed by my name, but was merely “la senora,” an attachment of my husband. A Chilean woman needed her husband’s permission to open a bank account or do many of the things I had taken for granted in the States.

We started building a house, hiring local workers to help with various tasks. When my husband fell ill with a lingering malady, I had to take up the reins to finish the house, and I discovered that the workmen would not take instructions from me, a mere woman. I had to get my husband out of bed and prop him up in the doorway, where he could repeat my instructions. When the house was finished, we planned a traditional “roof raising” celebration with the local families and issued invitations. Only the men attended, as the women were not allowed to come.

In Santiago and other South American cities, where the culture is more progressive, women engage in business and enjoy much more freedom, though still limited by restrictive laws. Even they must watch their step in the more “traditional” communities, as a Chilean friend told me. She and her husband had a summer cottage near our land, and she reported that when she had asserted her authority to instruct a male worker on their boat, he had deliberately tried to injure her with a dangerous “accident.”

In my travels around the world, I have seen that the ancient angers and fears of women still prevail in many cultures, where horrors such as stoning and mutilation persist. But I had thought we were moving past those in the U.S., especially during the Obama administration, with its embracing of women, minorities, all genders and lifestyles. The harsh reality of the oppressive new administration has been a slap in the face to so many of us, including the strong women in Congress.

When I learned of the silencing of Elizabeth Warren—temporary, thanks to her power and persistence—I realized that Resistance must move beyond storytelling, as vital as it is to our culture and community soul. I am making the effort to speak out personally and confront the outmoded, oppressive social model that the current regime is seeking to reinstate. I’m arming myself with facts to counter people who spout “alternative facts” that support the new tyranny in our country. I hope I will have the courage to take physical action if necessary to hold the line and protect our civil rights.

I recommend a short, pithy book, On Tyranny, by Dr. Timothy Snyder, Professor of History at Yale University. An expert on the Holocaust and recent European history, Snyder lays out clear parallels between the regimes of Hitler, Stalin, Putin, and others, and the tactics of so-called president as orchestrated by neo-Nazi advisor Steve Bannon. Snyder suggests ways to recognize and oppose efforts to erode our rights, especially vital to women and minorities.

So I join the groundswell and raise my voice against the many forms of tyranny, overt and insidious: “Resist!” 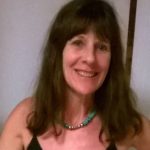 Award-winning novelist Sara Stamey’s journeys include treasure hunting and teaching scuba in the Caribbean, backpacking worldwide, operating a nuclear reactor, and owning a farm in Southern Chile. She taught creative writing at Western Washington University and shares her creekside land with wild creatures and her cats, dog, and paleontologist husband Thor Hansen.

Sara’s story “Reset” is included in the multi-genre collection Nevertheless, She Persisted, to be released August 8 by Book View Café publishing.

Here is the Amazon pre-order link for Nevertheless She Persisted