In honor of those at Standing Rock

She wakened, ears pricked to threatening men’s voices outside her small cabin deep in the harsh San Bernardino mountains.  Fists pounded on the wooden structure.  In darkness she reached for the shotgun, cocked and shot through the flimsy walls and walked outside.

“I’ll shoot your goddam balls off, sheriff , if you come ‘round here again.”

Juanita White Fawn hitchhiked to Los Angeles on the freeways to find lawyers.  In Crestline two public defenders took her case, my friends Rick Halpern and Phillip Barnett.  Over dinner they told me of Juanita’s plight.

She was defending a sacred burial site.  The State of California wanted a recreational dam.  Just another story in the plethora of government treaties ignored.

I drove out to her cabin.  By that time she was living in a teardrop trailer next to the cabin.  It was safer.  She wore a faded headband, work clothes and turquoise ring and bracelet.  Every day she milked forty two goats.

That’s how I could help.  I milked goats with her, avoided the buck, the stench of his beard fouling the air.  We walked the dry hills and she taught me the local herbs.

I had a friend at the San Bernadino Sun newspaper, Kathy Wilmore.  She connected me and I passed along Juanita’s story.  The following week Juanita’s picture was on the front page of the paper, above the fold.

By summer’s end I moved from the state and lost track of Juanita.  She lost the battle with the government.  And her goats and cabin and trailer.  She lost her purpose for living.  Someone sent me her obituary.

The ancient burial site is now Cedar Springs Dam and Silverwood Lake.  May the elders beneath be remembered in peace.

In honor of those at Standing Rock, I tell her story, one lone woman, taking a stand. 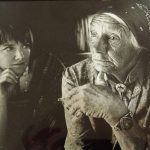 Author’s Bio:  The crackle of fire, the spin of the dryer, dog and cat stop quarreling and sleep.  C.J. Prince writes at any hour of the day or night as the Muse dictates. In this case, my Muse came as Diane Wood, in a Facebook message that 9:00 p.m. was my deadline.  I read it at 9:05 p.m. So I wrote what moved me.  I made an altar this day dedicated to all the people at Standing Rock and All People who suffer from brutality and indignity.  On the altar was the photo of Juanita White Fawn.  Her story came as a parallel to current headlines so many decades later.   I wear a safety pin. With rapid check for mis-spelling, I emailed Diane.  Thank you. Blessings.  All we can use is our art:  passion for the moment and revealing the truth as we perceive it.