I am writing a book. Well, trying.

Should I admit to this?

For context, I am a 29-year old, college-educated, white, bisexual, privileged woman from an upper-middle-class background. I only paid for my education through lack of sleep and stress—my parents paid the dollars. In the six years since graduating, I have worked steadily in order to live paycheck-to-paycheck. I want kids, a dog, and a home, so why spend my time writing?

I have tried living my ideals, but am losing my idealism. I am incensed that my vote is eradicated by a handful of rich people. I am disgusted to recognize that, yes, I have been indoctrinated by fear-based racism and sexism and that I have a lot of work to do. I am bitter that I cannot receive preventative health care at a reasonable price. And I am mad as hell that my food is poisoned without my consent.

As my voice is silenced every where I turn, and I obviously do not matter to the system, then why even attempt writing a book?

Ironically, the Divine Powers At Be gifted me with the calling of Artist. I tried denying it but only got depressed and physical ill. Voice is my jam; I don’t have a choice.

Of course I’m writing a book, because that’s how I’m programmed.

Recently, I had ‘That Moment’ artists describe, when family members spew, “Stop being stupid. You’re wasting time. You’re young, delusional, and shortsighted. Go back to school, get a job, get safe, and write in retirement.”

Let me tell you, it sucks being stabbed by other peoples’s judgments and fears. I’m a strong person, but I slumped big time. Imploded, really. Are these Voices right? Am I stupid? I watched myself deflate, crawl into my suit of self-doubt, and walk around like that for weeks.

And then I attended the Washington State Democratic Caucus. (I know, it’s a non-sequitur. Hang with me.) Still wearing my self-doubt suit, I sat quietly on a gray folding chair amidst 50 precinct neighbors. We waited for our votes to be counted. When the precinct volunteers announced that Hillary needed one more vote to earn a single delegate, the group became democracy-in-action. A 50-something woman advocated pro-Hillary, mentioning decency. A 40-something man declared pro-Bernie, fist-pumping for brotherly love. A 60-something gentleman generally thanked us for attending.

It fell silent. We waited.

And then a gangly teenage girl walked quickly forward. Nervously—gripping her waist and raising her shoulders to her ears—she told us her story:

This was her first caucus. Only seventeen, she would be eighteen by November. “In my heart, I want Bernie, but I voted for Hillary because she can beat the Republicans.” She looked directly at us and asked someone to switch their vote.

The pro-Bernie crowd exploded into applause. We didn’t cheer for her idea—we cheered for her. We cheered for her bravery. For stepping into her budding power. For being young, giving a damn, and saying so.

In a mere 45 seconds, this young woman pulled me from my funk. Who the hell am I to stay silent? Why am I moping around? Sure, those Voices suck. And, yes, they’re going to stick around and will probably take every opportunity to disembowel my courage. My family may never affirm my writing. I’ll likely mess up, and I may not change a single heart or mind. But I won’t be slaughtered or raped for speaking out, like so many other women around the world.

Get over it. It’s time to grow up.

Younger generations deserve role models for creative living; humanity cannot afford anyone’s apathy. I might wobble, but this is a spiritual contract that cannot be broken. It is time to pull out every single root of internalized, silencing patriarchy. It is time to stand and give Voice—my voice—to what actually matters.

Yes. I am writing a book. And a damn good one at that. 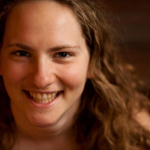 Anneliese Kamola is a multi-media storyteller from Bellingham, WA. She began performing with the Bellingham Storyteller’s Guild since 2008, and began training in Viewpoints Theater Technique with director Drue Robinson in 2010. Kamola wrote, produced, and performed two solo storytelling-theater shows exploring connections between womanhood, patriarchy, and eating disorders. And yes, she is currently writing a book titled, The Handweavers of Dachau: One Woman’s Choice in WWII Germany.