I am an American and I’m not thrilled about protest marching. I’ve done it a few times in my life and I’m not keen on it. Each time I marched, I did it in response to feeling impotent and thinking of myself as not doing enough to resist oppression. So, like so many armchair activists motivated by this politically challenging administration, I stood up to march for science when the opportunity presented itself.

In an attempt to light a fire with damp kindling regarding participating, I decided I would make a sign to carry. I threw myself into this project… colored pens…rolls of tape…a big ass dowel to strap the thing to. I had recently, in support of a cause in New York, purchased a tee shirt that stated simply, “I AM NOT AFRAID” in bold black letters on white. It made reference to a Joan of Arc production David Byrne was producing in NY. I was all about lighting up my inner Joan of Arc – with the shirt, it was personal – and I was going to MARCH! FOR! SCIENCE! So I designed my signs to coordinate with my shirt. I thought myself quite clever as I plotted out this creative endeavor.

A friend agreed to go with me to the march and we met downtown. We listened to some rather impressive speeches and I was struck by all the laughter around me thinking that some people really do enjoy these gatherings. There was the obligatory dissenting protestor for the other side – someone representing the persecuted, ill-informed, suppressed, climate change denying, white majority. One could spot a sort of jousting of signs between the warring factions above the crowd during the inspirational talks. No one made eye contact with me, or made mention of my sign but I didn’t think anything of it. I’m not a usual suspect on this kind of beat. Still, I felt relief when we finally got moving. ‘The Scene’ was wearing on me. The right wing science resister marched as well (this still being a free country). I received a lot of side eye en route. Shy, I thought. It wasn’t until the next day when I was sitting with my feet up drinking my coffee in the morning and idly looking at my sign when I spotted a spelling error. I sat bolt upright as the color flushed my face. Fuck. Me. Running…I had spelled afraid as “AFFRAID” on my sign!  The blood surrendered to gravity. I paled as I realized that I had spent HOURS parading in a crowd of people in the town where I live boldly proclaiming my ignorance! Horrified and too old to be embarrassed, I was shuttled directly to shame without paying any toll.

There is a standard prejudice among liberals that the conservative right are ignorant and illiterate. I can only imagine what was going through people’s predominantly liberal minds as they read my sign. Suddenly I reflected on all the laughter I had heard around and me and wondered how much was about my sign? Perhaps they thought I was an infiltrator from the right covertly trying to subvert their support for space exploration and environmental protection? Perhaps I was perceived as someone so far to the right she could no longer spell her name! Typical hysteria ensued as my personal fraud police – those keystone cops of cruelty – where in full whistle-blowing overdrive in my mind gleefully wedging blasting caps in my self esteem.

There is nothing that quite compares to the feeling that you are not doing what you are supposed to be doing no matter how righteous the intent. Nothing spells this out quite as clearly as personal sabotage and the subsequent stench of ego death. So how should this frustrated American resist? This first generation born American should be defining who she is and honing her imported super powers in this restless and ever changing country; she should be defying orders if needed and acting in accordance to honoring her democratic principles. Clearly this American should resist imitating the resistance of others and not be afraid to listen and march to her own drum. 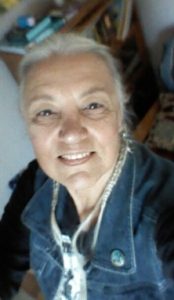 Author’s Bio: Cile Stanbrough began writing as a coping mechanism. She had been coping for so long that when blogging technology appeared she wrote out her demons by over-sharing there and began to thrive. Cile found solace in end of life care and started a private business, Your Amicus Mortis, where she proposes to help people and families better understand mortality in the modern world.  She designed a website for her business which is primarily a place holder for her blog entries on and about death related subjects. There is also an Amicus Mortis Facebook page that has small essays regarding end of life. Cile can be found writing with her coffee and her thriving mechanism fully engaged everyday at 4am.