Give Me a Topic and I’ll Write You a Story

I’ve been writing stories and doing storytelling for quite a few years now and whenever I do a session, storytelling or book signing, I’m always asked, where do I get my inspiration, and I say, “Give me a topic and I’ll write you a story, it’s that easy.”

But I guess that’s not true for all writers. You’d be surprised at how many people tell me they need to do tons of research, develop the characters, and then do an outline before they write the first word, and even then, it might take days or even weeks before the opening paragraph is finished.

I’ve had at least a dozen people tell me they’ve been working on their book for over a year, some, several years and my heart goes out to them. I encourage them to not give up, but inside, I feel most of them will never get the first book off the ground, and that brings me to my subject today – A book series…

Not only my publisher, but also most of the people I talk to say they love a series where they can follow a character from book to book. But most of those folks have no idea of what it takes to write a series. And for those who write the first two or three feel they are easy, but after that things start to get a little tougher.

Unlike a stand-alone book, the author has to build a life for this character, then keep coming up with adventures for that character [man or woman] to get involved in.

At this point I need to point out that the storyline must be able to carry your character from one book to another, like say, a detective, an attorney who specializes in a certain type of law, a western that is filled with action or whatever the writer may come up with. All I can say is make sure the road he or she is to follow will have a strong storyline.

It will be helpful if you have a mind that can slide your character into and out of situations that are both, funny and serious. After all, life is not all funny or serious. We all have our ups and downs. Life is full of surprises, and for the reader to be able to be drawn into your story so deep that they hate to put the book down, the writer has to keep coming up with fresh material, which for many becomes pressure they don’t want to deal with. For those writers, I suggest you stick to stand-alone stories.

With that said, who is to say the writer can’t build a following using the same character in stand alone stories. For some that might be tougher, but for others it is the very foundation they can build a career on.

So, whether you follow a character down a long path with many twists and turns, or put him or her in a stand-alone situation, find the path you are comfortable with and enable you to write your stories.

My publisher suggested I write a western series. I said, alright and sat down at my computer and began. My biggest challenge was what his name was going to be. Once I established that in my mind, I placed my fingers on the keyboard and turned them loose. Two hundred and ninety-two pages later, I had book one, ‘Stranger On A Black Stallion.’ I have written three Clay Brentwood books this year and book four should be out in the early part of 2017. I like to write two to three books a year.

My biggest advice is; don’t let anyone tell you how to write your story. It’s yours and yours alone. Just do the best you can and allow your mind to roam freely, whether it is a stand-alone book or a series.

For me, I like to write several genres, stand-alone, series and children’s books.

In parting, I will leave you with this, “Write to have fun. Tell the stories you want to tell, in your own voice… in a way only you can tell them.” 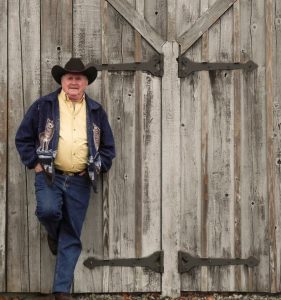