Forward with Strength: Launching your Book into the World

In July I wrote about taking a crash course in marketing my new book and a piece about why it was important to document Fred Fragner’s story. Today, I’m writing about why book launches and writer’s events in general are essential to celebrating community.

The book launch of Yishar Koach: Forward With Strength is scheduled for November 10 at Village Books. So, what’s a book launch? Well, it can be whatever the writer decides it should be.

It could be about shameless self-promotion a la Kardashian style. And it’s always about book sales because there’s no reason to write without getting that book into the hands of readers. And it’s also about celebrating because wowee zowee, you just spent “x” number of years creating and now you are ready to party with some people who appreciate what you’ve accomplished. And it’s about celebrating and sharing the content of your book and the contribution it makes to the sum total of human knowledge. So the author will most likely talk about their book and do a bit of reading from the book to share with their audience. And, at the other end of self-promotion, there will likely be many, many “thank you’s” handed out at a book launch.

So what do these things all have in common? Well, it’s all about celebrating community.

I have a quote in my book from Dietrick Bonhoeffer—the Lutheran pastor who was one of the few German theologians to staunchly resist Hitler and who was eventually hanged on April 9, 1945 for his role in a plot to assassinate Hitler. Bonhoeffer said:

What Bonhoeffer says is profound and it is in many ways the sum total of what it means to be a writer and why book launches and author events are such an important part of the writing experience. Writing, just like speech, comes from silence and solitude, and a rich internal life and probing introspection. But once we take pen-to-paper, we move towards community. And if all goes well, our right speech has the power to change the world. And it has, time after time after time.

If you are available on Nov. 10, I hope you’ll come celebrate Fred’s story. It took him many years before he was willing to share what happened to him but when he realized that he was one of the few remaining witnesses to the Holocaust, he began speaking out. And what he had to say has great significance for our time 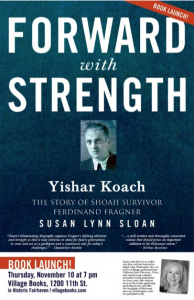 Author’s Bio:  Susan Lynn Sloan is an author and communications specialist who has lived in Maple Falls, Washington since 2004. Susan was born in Chicago and she’s a transplant from northern California. Her interests include family, gardening, snorkeling, books, and film. Her biography of Holocaust survivor, Fred Fragner, is due out this fall. It’s called Yishar Koach: Forward with Strength. Susan is hoping it will inspire readers to understand the importance of persevering even in the midst of the most daunting challenges.