Explorations in the Sociology of Writing

A stranger in an even stranger land………the land of the writers. There are many worlds, each its own reality. I entered the world of the writers as an elder with no illusions. I found my way into the world of words through the portal of a catastrophic disaster. By way of Louisiana.

For six months in 2006, I lived in a motel room in either Baton Rouge or New Orleans. I worked for FEMA (Federal Emergency Management Administration) assisting coastal communities plan for their recovery from what Katrina and Rita had wrought. And work we did, our contracts were for 72 hours a week, occasionally authorized to exceed that. But that’s a story for another time.

I would send back reports of my experiences, reactions, observations about what could be seen, some as travel writing, some about living life in a small space for weeks. Friends and family encouraged me to be more serious about the writing. When I returned home, I enrolled in writing classes at Whatcom Community College’s Community Education program.

I was an actual writer before, made a career of it, in academia, in state and municipal government, and consulting for real estate, community and economic development, but did not think of myself as a writer. I thought of myself as an economist. An economist who produced analyses, memos, reports, strategies, policies, programs, plans, proposals etc. etc. I may have written 750,000 to 1,000,000 words in technical reports over half a century. In some ways those reports wrote themselves: I was given a question(s) to answer – so the report was a narrative of what we did, how we did it, the results, the limitations and implications and what the client could or should do as a result.

Much different from my new world of “creative writing” which starts with a blank page confronting one pen (or one keyboard) being driven by one brain, may be operating in the right hand side of one mind. Usually having to think up the question. Writing is a response to one person’s creativity. But not a one-person activity.

I entered this new world, wanting to explore the right hand side   of my own brain after being schooled in and operating in the left, linear, logical, sphere. Two realities quickly confronted me: the need to activate and accept the left hand side of the brain and secondly the realization that I had entered   a community, a sub-population, a network, an industry and an art form: the world of the writer.

Writers’ world is peopled with self-defined writers, some lucky or good enough to be market defined for others it is a job, a profession or a hobby. Why don’t we refer to ourselves as authors? Maybe that title should be reserved for writers who are actually published. Now that self-publishing is practical that criteria may not work so easily. There are plenty of people and organizations to help you, to improve you, to stimulate you, to critique you, to publish you, to help you publish yourself, even sell you books to help you write books, usually they want money to do this. Other organizations and subscriptions are there to inform you, support you, connect you and network with you, provide a place to go when you need one, provide you a place to go to perform your work solo or in a group.

Another head-scratcher: why are local writerly events and activities dominated by females? In the classes at WCC, at the annual Chuckanut Writers Conference, for Village Books’ readings look around you, these are peopled largely with women. Curiouslly, if we look at the listings of bestselling writers in the NYT Review of Books as a ‘quick and dirty’ index of writerly success by gender, the gender loading is substantially more men than women. I have no answer for my “why?” question. Also of note, but more easily understood, notice how many of the writers you meet in the Fourth Corner who are retirees?

At a workshop for what Myers-Briggs personality styles imply for writing, the leader asks the “I” – Introvert revealed people to stand on one side of the room; the “E” – extroverts on the opposite side. Very few Extrovert styled people identified themselves as writers. This supports the mythology that writers are prone to scribbling alone during a solitary creative process; but we also know that writing requires interaction: critique, support, editing, feedback, empathy, and interaction, so not so solitary…….so while you can be an introvert to write, to be successful, to get recognition, you have to interact successfully with all manner people, especially the “market”.

More travel writing from this stranger in a strange land to come, maybe some answers. 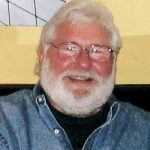 Bio  Ben Frerichs, of Bellingham, is reinventing himself as a creative writer. He likes to balance the creative freedom of fiction with the truthiness of non-fiction and welcoming do-ability of short forms. He participates in two writers’ groups, takes writing classes and has volunteered with the Chuckanut Writers Conference for five years. Four of his short pieces have been accepted for publication in local collections; he has a novel 2 -3 chapters short of a whole; and has completed half dozen scenes for a quest memoir. (Contact: fben7@msn.com)