Exclusive Interview with SeÃ¡n Dwyer and Matt Morgan on Writing a RWB Novel During NaNoWriMo! 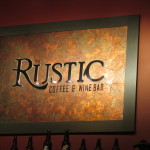 By Susan Chase-Foster for RWB

It was a dark and stormy afternoon, and the partial solar eclipse hadn’t helped any. SeÃ¡n Dwyer arrived early at the Rustic Coffee and Wine Bar, which was unfortunate because I still hadnâ€™t come up with any good questions, and you know how he loves to chat. SeÃ¡n looked a bit harried from a lack of sleep, or maybe from his day job teaching Spanish at the university. A social butterfly, SeÃ¡n worked his magic across the room, stopping at table after table to greet people he clearly knew, mostly women (his students?). He waved at the barista who waved back and shouted, â€œGot it, Profe!â€ Obviously, heâ€™d been here before. 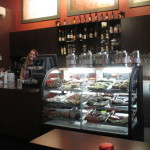 Within a minute, SeÃ¡nâ€™s 20 oz. pumpkin-spiced-extra-syrup-eggnog-hold-the-foam latte was delivered to our table. SeÃ¡n smiled, squeezed the baristaâ€™s hand and asked me if I had any change for a tip. I found a buck in my jacket pocket, but when he frowned at me, I pulled out a fiver, which SeÃ¡n slipped to the barista. He patted my hand, took a sip of his drink and whispered, â€œThank you for getting me out of my office.â€ 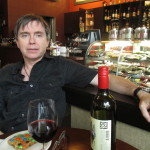 Matt blew, or rather stumbled in twenty minutes late, smelling of a mixture of alcohols. He was wearing a slime green rain jacket, a Bumble t-shirt from Rudolf the Red-nose Reindeer and really tacky shades, possibly because of the eclipse, or maybe because his eyes were bloodshot from booze. Beneath his intoxicated grin, he looked irritated. 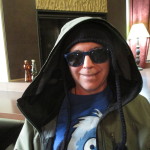 SD: Jesus, what happened to him?

MM: [Flopping into the chair next to SeÃ¡n] Whatâ€™ve they got here? I need a whisky. Youâ€™re paying, right?

RWB: Sure, Iâ€™m picking up your drink, Matt.

MM: I think you mean my tab, as in drinks plural, hon, or their ainâ€™t gonna be no interview.

RWB: Alright, you, too, Dwyer. This gigâ€™s on me. Fortunately, it wonâ€™t take very long. You guys ready to answer some questions?

SD/MM: You betcha!/Whereâ€™s my drink!

I quickly thought of the first couple of questions as SeÃ¡n waved the Barista over and whispered something in her ear. She shook her head, and then he said something else, and she nodded. In a flash the barista was back with a full bottle of Juan Gil and three wine glasses. She set them in front of Matt.

SD: Itâ€™s called wine, Matt, Spanish wine actually, and one of my favorites. Youâ€™ll love it and, besides, they donâ€™t have whiskey here.

SD: Itâ€™s this or nothing, dude. At least try it. [fills the glasses and hands one to each of us]

Matt grunted and took a tiny sip as if it were a Communion chalice, or poison. He paused for a millisecond, then quaffed the entire glass. SeÃ¡n refilled Mattâ€™s glass, and clinked Mattâ€™s and mine with his own.

RWB: Okay, letâ€™s get started. Please introduce yourself and tell us a bit about you as a writer. How long have you been writing and what is your focus? 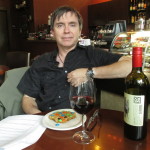 SD: Well, Iâ€™m Sean Dwyer and Iâ€˜ve been writing fiction for many years, since I was a child. I completed two novels and have some short fiction published. I’ve also written non-fiction work about Pablo Neruda. Iâ€™ve got two or three projects going now, and I love being part of the community of writers here in Bellingham. 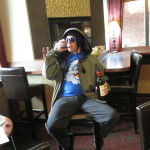 MM: Iâ€™m Matt Morgan and my gig is soft-boiled detective stories. Iâ€™m a plotter. I know SeÃ¡n writes by the seat of his pants, but given my genre I need to know how Iâ€™m getting from A to B. Otherwise, I back myself into a corner. Spontaneity is for other birds. I have a series detective, and I have 6 stories in that series outlined and one written, just waiting to be hoisted on the public. Iâ€™m going Indie, baby!

RWB: Youâ€™ve both been involved in a Red Wheelbarrow Writersâ€™ round-robin novel before. How many times have you participated, and why? What motivated you to want to be a part of a group novel?

SD: After I moved here in 2010 one of the first things I did was look up the Bellingham NaNoWriMo group and attend their kick-off meeting at the Black Drop. The group skewed young and didnâ€™t seem interested in networking with me. And so, my next adventure into the writing community was to join a small group that included Shannon Laws and Susan Chase-Foster, among others. When October rolled around, Susan told me that I should sign up for the RWB round-robin. So, I wrote my chapter in the middle of the month, loved the concept and got hooked into RWB. I found the group extremely welcoming and so I began to attend first Saturday of the month happy hours, and by the following November Cami invited me to curate the horror novel. I had never written in collaboration with other writers and thought it would be a good growth experience. And it was.

MM: I got lured in this last November because SeÃ¡n was managing the horror novel and he didnâ€™t have enough people. You might not know this but we both grew up Gary, Indiana. Iâ€™ve known him my whole life [high-fives SeÃ¡n]. So, anyhow, he emailed me and said, â€œ Can you write a couple of chapters to keep this book rolling?â€ So I said, “Dude, Iâ€™m not coming to Washington to write with you.” I misunderstood. I thought this was one of his writing retreat thingies, and that we would take turns writing chapters. I thought we would write it in one day and then post it over the course of the month. So I said, â€œI write soft-boiled mysteries and I donâ€™t know how I would do with horror.” But it was a lot of fun. And SeÃ¡n told me that some of the writers asked if I would be coming to RWB because they enjoyed my writing.

A guy who looks like a cross between a biker and a rock musician ambles up. “Hey,” he says looking at SeÃ¡n, “aren’t you SeÃ¡n Dwyer? Wow, I’ve heard about you! I totally want to read your novel. When’s it coming out?”

“Dude! Yah! Can I give you my email and you let me know when it’s out?”

“You gotta pen, Loretta?” the guy shouts to his girlfriend at another table. She fumbles through her backpack and brings one over to him. The guy writes his email down on a napkin, hands it to SeÃ¡n and leaves.

RWB: Moving on. What was it like having to write a chapter based on what came before your chapter? What were the positives and negatives?

SD: In 2012, I didnâ€™t even know how to find the previous chapters on the website, so I wrote to Cami Ostman and said, “How will I know what I need to write?” She gave me the link, which is right on the website. I read the first thirteen chapters and made a spreadsheet of characters and their traits. I had an idea about what I wanted to write for chapter 15, but the writer of chapter 14 ruined everything I had planned for chapter 15. So I adjusted and had a great time writing my chapter. It was a really positive experience, nothing negative because it enabled me to see how flexible I can be.

MM: SeÃ¡n warned me that any ideas I came up with would probably be trashed by previous writers. That added to the excitement of participating. Like I said, I’m a plotter, but once I read the chapter prior to mine there was so much material to work with that I simply took a couple of threads that I had as backups and was able to craft a good chapter. Then, I helped SeÃ¡n wrap up the novel. We collaborated because I set up the final chapter for him. That was a real positive. Sort of like flying an airplane down from 30,000 feet. Hey, anymore vino, Dwyer? [holds his glass up for SeÃ¡n to fill again] 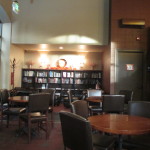 I look around. The place is empty except for the barista and the three of us. It must be getting late.

RWB: Okay, guys, just a couple more questions. What did you try to do with your chapter? For example, did you consider that somebody had to write after you?

SD: It was clear that some people tried to leave threads open for the next writer and I did my part there creating potential complications that someone could develop. As curator of the novel, I could see that a couple of writers didnâ€™t think about that, and so I would encourage writers this year to remember that they are passing a baton and that the baton needs to not close-off the story.

MM: I saw that people were doing something helpful by moving from one locale to another and creating a cliffhanger that the next writer could develop. I certainly did that when I thought of how my story arcÂ could go. I made sure I created a juicy situation that the next writer could use or not as she or he saw fit. I was extremely fortunate that I got to write at the end of the month, as well, because I handed SeÃ¡n the finale on a silver platter, and I let him kill everyone off.

RWB: Did you find writing a collaborative novel a creative process? What was your unique contribution?

SD: I did! The mental gymnastics involved were extremely energizing. And as for my contribution, when I wrote mid-month I kept as many threads open as possible and when I wrote at the end I brought everything home.

MM: For sure. It required agility which was a good stretch for a writer like me who plots every twist before writing a word. I suppose my big contribution was helping to filll days because SeÃ¡n was pretty short on writers.

RWB: What did you learn in the process?

SD: That Iâ€™m a more imaginative writer than I thought.

MM: I learned that I can write by the seat of my pants the way SeÃ¡n does. Now he has competition!

RWB; Would you do it again?

RWB: What advice would you give this yearâ€™s writers?

SD; I joined the project in 2012 with trepidation because I feared wrecking the entire novel. Enjoy the process. Be gracious for the legacy you’re creating for the next writer, and remember that no matter what your predecessors did, you will figure out a path for the story.

MM: I appreciate how the story reached me with lots of possibilities. Its good to give openings to your next writers.

RWB: Finally, is there anything else youâ€™d like to add?

SD: I could not have done any of this without the support of Cami Ostman and Susan Chase-Foster who made me comfortable in this exciting endeavor.

MM: I blame Sean Dwyer for hooking me into this.

The barista was standing at the door, a sure sign that the place was closing. Matt grabbed the wine bottle and swigged down the last few drops. I thanked the two writers and we headed out to the street where it was still dark and stormy, just the way we like it.