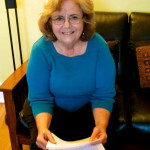 By Susan Chase-Foster for RWB

Laura Kalpakian, author of more novels than I can count on my fingers and toes was due at my house any minute and I was excited. For years, I’d been hearing about Laura’s talent, not only as a writer, but as a memoir instructor extraordinaire. When I found out that Laura, along with Cami Ostman and Susan Tive, her former students, had created a nurturing community of writers named after one of my favorite poems, The Red Wheelbarrow, I immediately joined. Now, after three years of watching Laura in action at the RWB monthly socials, working collectively with her on the writing and performing of our annual NaNoWriMo novel, as well as reading several of her delightful books, I had the opportunity to learn about how she approaches the task of entering a novel in Chapter 1. 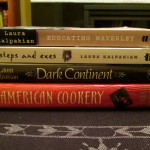 I set out several of Laura’s books on the coffee table, clicked on the gas fireplace to create a relaxed atmosphere and popped open a bottle of Juan Gil, knowing that she adores red wine, as I do. Before I could recite my favorite line from Educating Waverley three times,

Laura had arrived, handed me her blue jacket and established herself on my comfy love seat. I poured her a glass of wine and she took a sip.

RWB: Thanks, Laura. It’s Spanish. I have a bottle for you to take home when we’re finished. And now, if you’re ready for questions, shall we begin?

RWB: Laura Kalpakian, thanks so much for agreeing to be interviewed! As this is your third year being the lead writer for a RWB NaNoWriMo novel, I just have to ask: Why do you do it?

RWB: Cool! Would you please describe the process of writing a first chapter for a round-robin novel?

LK: Sure. So, this year’s was different, but in the past, well, in my computer I have a big fat folder called “Books Abandoned.” I worked on them, but they just never quite came together, so I abandoned them. For the first two novels I pillaged two different books from the folder. I had abandoned them as novels, so this was a new use for them. 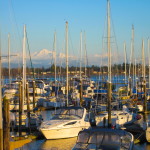 For the third novel, this past summer friends of mine took me on two boating excursions. I loved the names of the boats! I feel that each boat name tells someone’s personal story, and with all the names together in a marina, for instance, you can make a sort of narrative out of them. When you see a boat named “Moma’s Revenge,” you go hmmmm. And so, anyway, this idea came to me in my sleep, in a dream about a boat named “Placebo.” But I just couldn’t remember it. I thought it was Panacea, something with a “P.” And there was a boat named Panacea, but that wasn’t it. Then it came to me that the boat in my dream was “The Placebo.” It had great suggestive power. That went into the chapter.

I also remembered that on Valentine’s Day several years ago we were on Capital Hill in Seattle. We were walking and these beautiful roses had been flung down on the sidewalk, like a trail. I picked up eight of them and said to myself, There’s a story here. But I never found it. So that went into the chapter, too. Later, I threw in a laundromat. This was all new material. None of this was in the “Books Abandoned” folder.

LK: In the first chapter of any novel you deal yourself a hand and you ask, what can I do with this? There’s clearly much more responsibility in writing your own book. You have to be resilient and look at what the characters can tell you. With the collective novel, a term I prefer to round-robin, the responsibility belongs to thirty people and you really have fun with it. You see yourself as part of a collective, fun opportunity. The deadline is important in that you have to put the chapter behind you, which is harder with a personal novel. Writing is a process, and with a personal novel it’s a process until the book has an ISBN number.

RWB: What’s important for an author to do in Chapter 1?

LK: In a first chapter, the task of the narrator is to set up tensions. Placebo has far fewer characters. We basically have Miranda. My task was to set up tensions that were inherent but not apparent. Miranda is questioning her relationship with Scott. But then we have this other suspicious, mysterious couple, Christopher and Claudia. She’s a contemptuous woman. And, of course, we have the roses.

The characters have implied interesting backstories. Scott is a trust fund kid who loves creating pastries. Miranda has a degree in art history. Chef Sigurdson is mysterious and demanding. Obi Juan is mysterious and nasty. You have to suggest mysterious connections and mysterious antecedents. What I’ve provided in Chapter 1 could be taken as a crime story because of the possible drug connection. Or maybe a relationship story because there’s tension between Miranda and Scott. Or maybe it will be about Miranda finding herself. Maybe Sigurdson will even turn out to be like the Swedish chef on the Muppet Show! That would be hilarious! 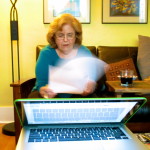 Laura fanned quickly through her copy of the interview questions and took another sip of wine.

RWB: How does writing a first chapter differ from writing, say, a second or third chapter?

LK: In my opinion, what I did is the easy part, but as a seasoned novelist the leading chapter is something I know how to do. The following chapters will pick up the threads and fill in the characters’ connections and antecedents and enrich them, leaving new possibilities for those who will write later chapters.

RWB: What are the challenges with a collective approach to writing a novel?

LK: That really depends on the writers who come after. Succeeding writers have the freedom to follow and create threads. Coming later, you have to account for what has come before. The later you write, the harder it is. I wrote late in the horror novel last year, under the name of Jeanne Moreau, and I felt like I had to rescue Julia, a character, from her circumstances. She was so vaporous she fainted at every crisis. This is sometimes the task of later writers. You can change or give life to a weak character. The people I admire are those who write the last chapter. They have a huge task to accomplish!

RWB: Just one more question, Laura. What advice would you like to give to the other 29 chapter writers for this year’s novel?

LK: Stick with the givens in the story. So, for instance, it would not be a given in the story that Miranda would turn out to be Scott’s half-sister. That’s just too weird! Ask yourself, where is the tension and how can I exacerbate and accelerate that tension? Everything you write has to Forward The Story. FTS! That is the writer’s obligation. 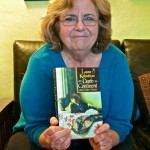 Here’s Laura with my copy of her story collection, Dark Continent