I was invited to write a blog post that explored the theme of “Resist.” Is it fitting that I resisted sitting down to write the post, or is that irony at its best?

I have always had trouble meeting deadlines (shh, don’t tell my editor). But what exactly have I been resisting, avoiding, battling with, struggling with?

When I write, I see the faces of my audience, as if I’m on stage. I’m ready to utter my lines, but my throat tightens with censorship. Will the performance be as good as the rehearsal?

The story was written in my head, but when I face the page, I’m as blank as a painter’s new canvas. Why does that prospect instill panic, rather than entice an invitation?

When I write, judgment enters the room. The clipboard clasped against her chest. She bites the end of her pen. I see the peering eyes above the bifocals and the critique oozes from her seat. She’s not in the front row shaking her head. I see her midway, maybe seven or eight rows back, just far enough to give the guise of objectivity, yet close enough that I can feel her heat.

These worries are cliché: a writer stalled at the desk, mind numb, paralyzed in the chair, what to write?

Enough of this, I say.

I’ve been resisting the muse for too long. I’m taking an ice pick to my writer’s block. It’s time to chip away.

I turn to my best friends, on my bookshelf: King, Lamott, Goldberg and others who instruct and inspire. Strunk & White are in the corner (smoking a cig and sipping a whisky).

The block begins to melt, just slightly. Off the shelf, I pull out a marked up paperback. On the cover, I see six thin pencils, standing at attention, serving as tree trunks to the web of ideas a writer calls upon when she pulls the words from head and heart. The inside back cover is like a New York City subway car in the 80s. Scribbled graffiti with lists, arrows, bullet points and notes I wrote the first time I read the book.

It’s “The Forest for the Trees,” by Betsy Lerner, a long-time editor. She dubs it “Advice to Writers,” gently providing food for thought in the Track Changes of our writer minds. It’s one of my favorites on the bookshelf and today, I summon her counsel.

As I flip through the pages, I happily find several passages that I had circled, underlined or starred, to remind me why I am a writer, why I am struggling to find my confidence and why I am resisting my muse.

“The ambivalent writer is often so preoccupied with greatness, both desiring it and believing that every sentence (s)he commits to paper has to last for eternity, that (s)he can’t get started.”

“Whatever you do, don’t censor yourself. There’s always time and editors for that.”

“If you are writing to prove yourself to the world, to quiet the naysayers at last, to your cold and distant father take notice, I say go for it.”

“Writing demands that you keep at bay the demons insisting that you are not worthy or that your ideas are idiotic or that your command of the language is insufficient.”

Yes, I recall the day I originally highlighted these poetic and prophetic paragraphs. As a collective, they remind me that I liken my writing to shaping a piece of clay. You wouldn’t start with the tiny details or fine lines until the foundation has taken shape. So too with writing, it doesn’t make sense edit, to carve away pieces that could be saved for good use later until you’ve got the thing laid out.

Early in “Trees,” Lerner tells a story when she got to study with Pulitzer Prize winning poet Jorie Graham. One day during a private conference, Graham had played a trick on Lerner – one that set in motion detective work of discovery. To be instructive, Graham had reassembled a series of Lerner’s poems in a way that transformed the way Lerner approached her writing. The poems had effectively gone from “acorns into an oak.” With renewed creativity and a permission slip to experiment, Lerner rushed home and sifted through her poems,

“If you are struggling with what you should be writing, look at your scraps.”

Today, I pull those paper snowballs out of the trash can. I dust off the unfinished essay. I toss out expectation and judgment.

“Whatever you do,” Lerner goes on to say, “I beg you not to look at the bestseller lists.” Don’t try to copy what already exists. Look at your scraps; therein lies your pot of gold.

Now, resist the voices that sit on your shoulder. Judgment does not have to be front and center; relegate it to the back row. 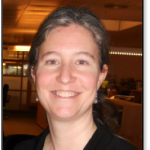 Author’s Bio:  Jennifer Karchmer is a journalist, editor, proofreader, writing coach and podcaster. She owns Over the Shoulder Editorial. She lives on a lake in upstate New York.