Beware the Jabberwock, my son! The jaws that bite, the claws that catch! –Lewis Carroll

After I turned in the final drafts of each of my books–From Paradise to Puddledub (Coughing Dog Press 2002) Little Bookstore (2012 St. Martin’s Press) Public Health in Appalachia (McFarland Press 2014) Fall or Fly: the strangely hopeful story of Adoptions and Foster Care in Coalfields Appalachia (Swallow Press 2017)–my agent Pamela, a diplomatic woman of great gentleness, would drop hints: “Working on anything?” She doesn’t push, she just . . . asks. Every once in a while.

Lest poor Pam bear the brunt, I have WANTed to be writing again almost immediately after each successful manuscript delivery. (Following the requisite three days of sitting in a dark room staring at the wall.) A vague idea has swirled into semi-solid form, and the little pin prickles of desire, of inspiration–of guilt–have grown into claws that reach out to pull my butt back in the chair.

Those of you out there who write know what it’s like: toy with an idea, write a scene, think, daydream. Start to build. Force yourself into the chair and silence your internal critic’s voice: “This is stupid. This is crap.”

Beware the jaws that bite.

Then that half-formed beast of an idea eats at you, bite by resisting bite, and you’re hacking at it bit by resisting bit, until you’re dropping social engagements left and right to get another hour with your characters. You never want to leave that chair.

It’s not unlike being in love.

Last weekend I fled to a quiet place for two days of butt in chair and fingers on keyboard. It’s funny how writing begets writing in the same way that exercising first exhausts you, then energizes you to exercise more. First your brain goes into a post-writing meltdown where you have nothing to say; every last spark of creativity gone, you curl into fetal position under a quilt. Lying in the dark, you start to think “what if he…” and you’re up again, fingers on keys, butt in chair.

And then you hit a bald patch, or the characters take over and drive you into a corner you can’t see a way out of, and you pout and fume and go back under the quilt, and a mental image comes to you, and up you get, and so it goes.

Perhaps it’s less love than lion taming. You don’t want to completely subdue the beast of an idea, but you can’t let it take over, either.  Partnership rather than dominance; you need it and it needs you. Plus you and that roaring beast have swallowed each other whole by now, so you’re in it and it’s in you.

But it’s always, always a thrill when those claws reach out and catch you, and you see in your mind’s eye what’s going to happen next, and you’re just waiting for the chance to put your butt in the chair and your fingers on the keyboard and hear that beast you can’t quite tame roar again. 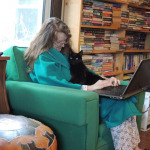 Bio: Wendy Welch is a writer who with her husband owns a bookstore in rural Virginia. Her books tend toward memoir and journalistic storytelling set in Appalachia. She is currently working on a memoir about rescuing cats in the bookshop. The Little Bookstore of Big Stone Gap was published in six additional languages and brought visitors from many interesting places to visit the shop, plus no one threw a brick through their window, so she considers that memoir a great success.