I got my U.S. citizenship the old-fashioned way: I earned it. I filled out reams of forms, listed every address where I’d every slept more than one night, studied hard for the test, and sat for hours in the corridors of the Atlanta Immigration and Naturalization Service offices as my 9 a.m. appointment slouched toward early afternoon. And that was just the culmination of a decades-long process.

I came to the States in 1977 as a dependent on my husband’s intra-company transfer visa, good for a year, renewable for another year. By 1979, we had a second baby and faced the fact that we were no longer a globetrotting couple with a two-year-maximum horizon. We applied for Permanent Residence – a Green Card. We didn’t retain an immigration lawyer – how hard could it be? We were both college-educated native English speakers. Months later, after humiliating medical examinations, and laughable English language competency tests, we found ourselves waiting with burkha-clad women and nervous students for our INS interview. It was the height of the Iran Hostage Crisis, and every Iranian in the U.S. had been called in to verify their immigration status.

I could have jogged along happily with my Green Card for ever, I suppose. Other ex-patriot friends have done that. But I ached to vote! I was always interested in politics. My undergraduate degree is from the London School of Economics, or “the London School of Bloody Commies” as my conservative father was pleased to call it. I door-belled for Harold Wilson in the 1974 election that returned the Labour Party to power in the UK. I marched against the Vietnam War and boycotted South African fruit at our local greengrocers.

So in 1991, I stood proudly with several hundred other new citizens from all over the world in the Atlanta Civic Center and pledged my allegiance to the United States of America. I have voted in every election since. Not just the big ones, the once-every-four-years presidential, but the mid-terms, the primaries, the judicial (I’m still at a loss why state judges are elected not appointed), the school board, the water board, the dog catcher. Yes, I’m a voting junkie, and I do my research. I read the Voter Pamphlet, I go to the League of Women Voters’ candidates’ forum, and I take notice of endorsements.

I don’t expect every citizen to be as gung-ho as I am, but for God’s sake, people, vote!

In the recent presidential election, the turnout was a paltry 54%. Ninety-seven million eligible voters couldn’t be bothered. Couldn’t shift their sorry asses to find out where their polling place was, or, in Washington State where mail-in voting makes it super-easy, lacked the energy or interest to fill in the blanks and wander down to their mail box.

I looked at other places I’ve lived to see if voter apathy is a global phenomenon, and found that US voter turnout is abysmally low by international standards.

In the recent first round of the presidential election in France, 80% of eligible voters cast a ballot: four out of five Frenchmen and women were engaged enough in the democratic process to vote in the equivalent of a primary election. And that was down from the last presidential election in 2007 when turnout was 84%. Belgium saw an even higher rate of voter participation in the most recent national elections: 87%. I was appalled at the results of the recent UK referendum on leaving the European Union, but at least that decision was taken by 72% of the electorate, a slightly higher percentage than had turned out for recent parliamentary elections. (Figures from the Pew Research Center.)

Like many who were disappointed at the November election results, I have progressed through various stages of grief. I can’t say I’ve reached acceptance, but I’m certainly not going to hide under the covers for the next four years. At sixty-seven years old, four years represents a substantial portion of my future. Life is too precious to waste. There are too many wonderful places to go and experiences to savor. I know how privileged I am to be white, wealthy and living in this beautiful Fourth Corner of the USA. However, one thing still keeps me seething with anger: the apathy of Americans who didn’t cast a vote.

“In a democracy, voting is the least we can do.” Gloria Steinem.

Can I get an Amen? 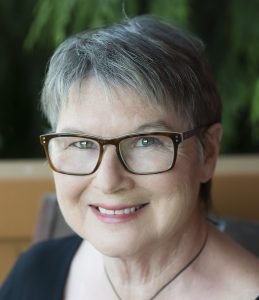 Author’s Bio:  After a career as an employment lawyer, MARIAN EXALL now writes what she loves to read: mysteries! Like her heroine Sarah McKinney, Marian was born and raised in England. She lived in Atlanta for thirty years before moving to Bellingham where she hikes, gardens and does grandparent duty.