AN OPEN LETTER TO BETSY DEVOS

Of all the appointments your President – not mine – made to his cabinet, yours was the one I resisted and feared the most. He-who-shall-not-be-named recently said, “Who knew health insurance could be so complicated?” As a retired public school educator, with a thirty-five year career as a middle school classroom teacher, building principal and school librarian, I would submit that providing ALL children with a free, quality education is equally complex.

My first teaching experience took place in an inner city elementary school in Syracuse, NY where 99% of the students were African-American, and most of their teachers, like myself, were Caucasian. In 1963 Syracuse Public Schools did not provide a lunch program. Have you ever tried to teach kids who arrive at school every morning hungry and then go home to a lunch which often consisted of soda and potato chips? I have.

In the early 1990’s I became the Associate Principal of a K-8 school in Vermont’s “Northeast Kingdom,” historically the most impoverished section of the Green Mountain State. Our school population hovered close to 800 students and we offered both breakfast and lunch to our children. But filling empty stomachs doesn’t solve all problems. Have you ever made a home visit to inquire why two sisters were missing so much school, and found them living in an unheated shed with their single mother, sleeping on mattresses on a concrete floor? I have.

As a school librarian in an interstate high school, part of a district that was established in 2000 to serve students from four small towns in Vermont and New Hampshire, I quickly discovered that students did not come to the library just to look for books. No, I had my “lunch-time regulars.” Teens who could not bear one more day of sitting alone in the cafeteria. Teens who sought the comforting refuge of a couch in the library. Have you ever purchased a book such as Make Lemonade by Virginia Euwer Wolff and then placed it in the hands of a depressed seventeen-year-old girl, in hopes that the groundbreaking novel would help her find a way out of a dysfunctional family situation? I have.

But all the experiences I had as a public school educator pale in comparison to those I faced as the mother of my first-born child born with Down syndrome in 1966. Imagine my dismay when my son Steven turned five and I discovered that the local public school could and did refuse to enroll him in their Kindergarten program. For the next several years Steve rode the “short bus” to his segregated Special Education classroom, away from from his younger brothers, away from the neighborhood kids with whom he played, away from his hometown. Only the passage of PL94-142 in 1975 guaranteed Steve and other children with disabilities the right to a free and appropriate education including placement in an educational environment that allowed the maximum possible opportunity to interact with typical students. By the way Ms. DeVos, PL94-142 served as the forerunner to the Individuals with Disabilities Education Act (IDEA) passed in 1990. IDEA is the Federal legislation you initially said in your confirmation hearing would be “…best left to the states.”

Our public school educational system is not perfect, and probably never will be. But public schools remain the best chance many children have to realize their full potential. As a parent I fought to ensure that all three of my sons received the education to which they were entitled. As an educator I know that many children cannot count on their parents to advocate for their needs. Author Paul Daugherty states in his book An Uncomplicated Life, that parents need to “expect, not accept.” I could not agree more. Since you yourself have no experience with public school education, how do you intend to provide continuous improvement and growth for these institutions, who in the fall of 2016 enrolled over 50 million students? You can be certain I will continue to carefully monitor all action coming out of the office of the Department of Education. I won’t accept decisions which I feel will weaken our public schools. I will expect you to educate yourself and appreciate the complexities of a system which serves all children regardless of income, parental involvement, race, immigration status, disability, gender or sexual orientation. For the sake of these children, I WILL PERSIST. 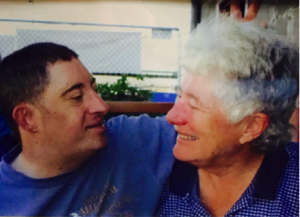 Author’s Bio: Linda Morrow moved to the big city of Bellingham after living for twenty-five years on a dirt road in Vermont’s rural “northeast Kingdom.” She is grateful for the warm welcome she has received the area’s writing community. A special shout-out to the Talespinners whose unflinching support has carried her though the long process of her still-in-revision memoir about raising her oldest son, born with Down syndrome in 1966.