An Authentic Hero: My Rant on Resistance

I don’t expect much from anyone any more.

I spent most of my life organizing people to stand up for something, almost anything, they could believe in, something greater and more important than themselves.

I retired from trying to make a living at it but found it impossible to quit completely. So I tried to find something simple, low key, and that wouldn’t matter too much if I [once again] failed miserably at changing anything:

It was 2014 and, while climate change might eventually bring the human race to an early extinction, that was way off in the future and everything seemed to have its ups and downs and maybes. Al Gore had made it into a hit movie and no one asked him about it anymore.

I could dabble. I could take my time. No one would notice if I got nothing done for a few years or a few decades. At age 66 I only had a few decades left, so . . .

Meanwhile, back in my home town, a little college town in the upper left hand corner, they started building the biggest “luxury college dorm” the town had ever seen. The most grotesque, bloated, monument to hubris money could buy.

And only one man stood in their way.

But he’s not the hero.

But I helped him stand in the way because I thought maybe building huge projects in the middle of narrow streets and tiny apartments and condos would make a bad climate situation worse.

And no one else really cared. And the local papers, daily and weakly, looked the other way. And neighborhood groups stayed focused on neighborhood issues. Global issues had nothing to do with local people.

And then the phone rang.

Someone [let’s call her KLH because those aren’t really her initials and she doesn’t really want anyone to know her name] called me up, out of the blue, to ask if anything could be done to STOP THAT

She seemed to think that she, mere tenant, a mere college kid, had certain inalienable rights, equal to those of two billionaires living comfortably in a sunnier state in the same union.

Those God damned machines at that too fucking big project triggered symptoms of her PTSD* condition in 2015, before she ever heard them, before they moved their first cubic yard of dirt out of the way and into the dump trucks.

Feel it in her bones, ringing in her head.

Which she refused to ignore, refused to shut up and go away, like everyone else would. She would stand her ground while others drifted away. She would speak truth to power when no one else was listening. Just as she still does to this day.

Just as her sister, Joan, a simple farm girl in France in 1425, seeing and feeling visions that would save her nation but not her life, was labeled a crazy witch for acting on her feelings. They knew where she bivouacked and they knew what to do.

Or her sister, Rosa, in Montgomery, who just sat in her bus in 1955 because she knew right from wrong. And she knew her rights and she knew that the Klan* knew her address.

And the older and wiser leaders of the local NAACP chapter may have looked at her the way most people may look at KLH today. Foolishly idealistic if not clinically insane for saying what she says and never really backing down, never really being as polite as she sometimes acts.

All I felt was blessed, probably the way MLK* felt about Rosa or the Dauphin of France felt about Joan before him.

Blessed with someone, anyone, who would stand up to anyone, anything to get what she wanted.

Wanted passionately for herself, but also for others, more than herself.

So it’s over, right?

There’s really nothing anyone can do about it, right?

So England will win the Hundred Year’s War, right?

And we will never, ever, STOP THAT 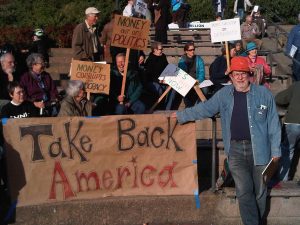 Author’s Bio:  Jon Shaughnessy is a climate care organizer who thinks most people will only take steps to prevent climate chaos if people who already care [and know how to write] improve the “messaging” of the global environmental movement. He has learned from personal experience that most people are concerned but don’t see or hear anything that speaks directly to their situation in the world. He has met many amazing heroes in his lifetime in many different walks of life, in many different struggles, and hopes to find more people like the subject of this essay before he dies. Most recently, he has been associated with Friends of Climate Care, which can be contacted at 360/671-0248 or redjon76@yahoo.com.