The smell of laurel and olive trees is impregnated in my skin. The scent is integrated and meshed with generations of my family. It was my great grandfather Elias, who had the original idea of planting laurel and olive trees on the small piece of land that he inherited from his father. Elias planted ten olive trees and one laurel whenever a child was born. When my grandfather Adnan inherited the land he went around asking his friends and neighbors what they would do with them. There were many suggestions and one night he came up with the idea of making soap. The soap of Aleppo is famous worldwide. Adnan and then my parents continued the tradition of planting olive and laurel trees every time a child was born, so now we have many trees. Before the war we had a successful soap making business.

When I was a little boy I would spend my days running in between the trees, as I got older I began to help with the recollection of olives, which was very hard work. But it was fun too, the whole family worked together. The women began cooking the day before, making baba ghanoush, kibbeh and, tabbouleh. The men and younger adults did the physical work. The grandmothers helped with the little ones. There was a job for everyone and within a few weeks it was all done.

One day I was running with my friend Ahmed. We were racing through some buildings that had been bombed the month before. Suddenly I heard the plane and before I could yell to Ahmed there was an absence of sound, as if all the noise in the city had been pulled into a vacuum and then the sound was deafening and I was thrown to the ground by a violent shock wave. I must have fainted. When I awoke, I did not recognize my surroundings. It was full of dust, debris, there was dirt in my mouth, my lips were dry, and my body and my eyes hurt. I tried to get up, but fell down. When I finally stood up, I began calling for Ahmed, but he did not answer. My heart began to beat faster, I felt sweat on my hands and began to push things around. But I knew that he would not be alive.

After that day I did not go out on my own again. I trembled when I heard the planes. I woke up yelling at night, calling for Ahmed, until my mother would come and touch my hair, shushing me.

“I don’t’ know. It is God’s will,” Kamar answered. I did not like this God that took so much and gave so little.

One day I asked my grandpa, why he had not wanted to leave.

“A country’s strength is in its people. If it’s people leave, it weakens it. I will not abandon my land. I believe there will be peace in Syria, soon. I want to be there when it happens”. My parents had offers to leave to France, but after many discussions, they finally agreed they could not leave my grandpa alone.

We watched our friends and neighbors flee, some died and some joined one or the other side. The Americans, the Russians and the Europeans bombed us. They say they want our oil. I just hope my grandpa will see peace. His parents planted the olive and laurel trees and he began the Aleppo Soap Company. We have been closed for six years, but next year we plan to reopen in hopes that the civil war in Syria will be over. 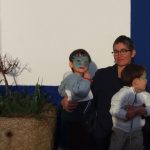 She looks forward to her boys beginning school in September, so she can have more time for her different writing projects; a couple children’s books, a blog and working on an historical novel “Rosannah”, which takes place in the 1770’s in Pennsylvania and in Wales. She also enjoys writing in Spanish and has spent this year entering writing competitions in Spain and South America. In January two of her short stories “Otra Etapa” and “Blind George,” were published on an online journal www.escritores-en-red.es