I’m a writing whore. When asked if I’d write on the topic of the word “resist,” and when I realized that it would be printed on November 5, I had to say yes. Even without thinking.

This is the year of “resist.” Is it me, or does it seem like, since the explosion of social media, the topic of Resistance is relentless? There are Facebook pages of groups and movements devoted to it. Books with “Resist” in the title. Hashtags galore. So what about this “resist?” I had to look it up. Not because I don’t know what the word means, but because it means so many things.

These are my favorite definitions:

Withstand, be proof against, combat, weather, endure, be resistant to, oppose, fight against, refuse to accept, object to, defy, set one’s face against, kick against, impede, hinder, block, thwart, frustrate. AND ,refrain from, abstain from, forbear from, desist from, not give in to, restrain oneself from, stop oneself from

There are so many things I passionately resist. Attitudes towards climate change, sexual harassment, easy access to guns, racism, domestic violence, and assholes being elected, just to name a very, very few.

I’m resisting all those things. I have been, albeit quietly and in my own personal circle, for years. It’s overwhelming at times, and I find myself occasionally taking a break to just be. Still, I emotionally, and occasionally financially, continue to support issues that need to be resisted. I knew for my sanity, at some point I would need to completely quit resisting something. Or one thing.

I am no longer that young, idealistic college student who was going to change the world. I am getting tired. And old. And realizing my mortality every time I read the obituary column and see someone my age, or younger, on the page. If you read the obits, you know that feeling of “OhCrapThatCouldHaveBeenMe.”

Nearly ten years ago, Sherry Lansing first stated that 60 is the new 60 when she wrote about social think tank Civic Ventures’ Purpose Prize which was awarded to citizens who were changing the world after age 60. (since then, the award is made to citizens 50 and older…maybe the 60 year olds were too tired to change the world?)

Journalist Priscilla Warner questioned this concept two years later. Looking at 60 from another direction. Instead of looking to the future for what might be, she was looking back at what was. Her writing hit a chord for me. I, too, always wanted to be older than I was. Until I was older.

My hair is gray.

Not like, “oh, look, I have some gray hairs, I should add some color, but

Truth be told, I started coloring my hair when I was in my 30s.

Years ago, I looked younger than my younger friend Doug, mostly because he had gray hair, and I had been coloring my gray hair brown for well over twenty years by that time. When I turned 50, I noticed the gray really started to take hold. The strands of white and silver weren’t hard to find. There were no subtle salt and pepper strands of hair. Nope. Big patches of white hair that had to be addressed before they grew 1/4”, so that in my part, you wouldn’t see the 1/2” skunk stripe crossing my scalp.

When I turned 50, even though I actively resisted “getting old” and going gray, Every time I bought a box of hair dye, I was always keeping a simple thought in the back of my mind: “Would this be the last one?”

I have a photo of my mom and me in my office. It was taken when she was in her early 60s. Her hair was white, white, white. She looks old to me, old like my grandmother did when I was young. I worried that if I stopped coloring my hair, I would instantly look old.

I don’t think I was really fooling anyone that I had gray hair. I see women now and I think I can tell when they are covering the gray. For some unknown reason, I found my personal power in early 2015, and I decided to stop coloring my hair. I knew it was a gamble…I didn’t know how much gray or white there would be, and what consistency. Or if I was going to look old.

I’m gray now. I embrace it. I stop women I see with gray hair like me, women who obviously have stopped dying their hair and show my support and understanding.

So back to why I could not resist posting the November 5 article on “Resistance.” 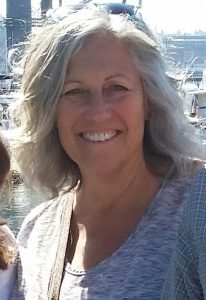 Author’s bio: Marla Bronstein is a freelance writer and has lived in Bellingham for more than 25 years. She maintains two blogs: If Only I Were In Charge and her video blog GimmeAMinute. Marla is the published author of A Whole New Normal and does occasional event planning and project management. She is Board President of S.O.A.P.Box Players, Inc. an award-winning non-profit organization that uses the arts as an educational tool. Marla has partnered with numerous local performing arts organizations in many capacities. Marla currently sits on the National Board of the Acoustic Neuroma Association, a patient-focused, member organization that supports families of and those diagnosed with an Acoustic Neuroma. In her very little spare time, Marla can be seen writing in her “coffice” (any Woods Coffee shop in and around Bellingham), networking and building community.