There is a myth that has gained increasing popularity here in America: it’s the myth of the “rugged individualist.” According to this myth, rugged individualists built this country. Lone entrepreneurs moved it forward. Only strong, independent leaders can keep us on the path to…to what? Going it alone as a nation? Ignoring or subduing the rest of the world?

It’s all a lie. “Rugged individualists” did not build this country; refugees and dreamers did that. They did it together, by working together to build towns, villages, cities, states, and finally an entire nation created from a vast patchwork quilt of heritages, beliefs, and visions for the future.

Yes, individuals can imagine and create amazing things. But it takes more than a single person to translate those amazing things into reality. And imaginative individuals do not arise mysteriously out of the ether and develop their capabilities single-handedly. They come from families, grow up in neighborhoods, learn from those around them. Whether they battle their environment or are nourished by it, they are the product of human interaction. And these individuals always receive help somewhere along the way. A piece of advice, a life lesson, someone’s garage to work in. There is no such thing as a self-made man. Man, woman, or child, we are all in this together. Together we achieve; apart we abate.

But it’s a jungle out there, right? An every-man-for-himself, dog-eat-dog world?

Another lie. Exactly how long do you think a rugged individualist would survive alone in the jungle? What kind of life would that be? No man, woman, or child can stand alone for long. And what do you get with a dog-eat-dog world? A bunch of half-eaten dogs. Animals run in packs for a reason. Humans do, too. For one thing, it makes life easier. For another, if you have a big enough pack working together toward a common goal, you can make life better, both for you and your pups.

Individuality is indeed one of the great beauties of being human. Here in America, we especially prize it, and rightly so. By celebrating individuality, we celebrate diversity; and diversity is the key to our survival. Monocultures don’t tend to last long. Being so uniform, they lack adaptability and do not hold up well against changes and challenges. When it comes to survival, conformity is not a good thing.

That is the conundrum our nation has always faced: Celebrating the individual while working together. That’s what truly makes America great: Our ability to hold that paradox in our hearts and minds and to move forward toward a better tomorrow for ourselves and our children and all the generations to come.

A big lie, and one that now threatens to tear our country apart. Oh yes, Americans are most definitely diverse in appearance and thought. That is our strength. That is what propels us forward and brings out our unique creativity as a culture. And The Government? We are The Government! It’s not some monolithic, menacing monster that’s out to get us. We elect our representatives. If they fail to do their job, that’s our responsibility.

Responsibility. There’s a word that’s lost its way. Yes, we the people are the government. We can provide for the common good if we truly want it. If our elected representatives are acting irresponsibly, then that’s on us. We can change that. We can make it so that governmental officials respond to our wants and needs, not those of their wealthy donors. Right now, it sure seems like many of our representatives are bought and paid for by individuals who want only what’s best for them. We can change that, too. The Government is not the boogeyman. We, through inattention and falling for those lies, have become our own monsters.

We must resist the lies that lead us to believe we can only trust ourselves, that our self-interests are paramount, that we know what’s best and the rest of the community be damned. Paradoxically, this often-heard complaint is the most self-destructive command in the English language: “Just leave me alone.” You are not alone. You may try to be a “loner,” but you are never alone. Alone is a place where souls go to die.

We came from all over the world (yes, even the “indigenous” peoples), willingly or not, to create this nation together and to live our diverse lives in harmony and with dignity and imagination.

We must not let this dream that is America die.

Resist the lies. Persist in the truth. Exist together. 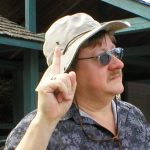 For the past 30 years Matthew has been scribbling humor and human-interest pieces and crafting political blogs for consumption in the Pacific Northwest.
Matthew has always been a student and seeker. Early on, it looked as though his path would lead to the Episcopal ministry. Luckily for the Episcopal Church, that path turned into a 40-year detour.

But everything started falling into place when Matthew and his wife moved to the hinterlands of northwest Washington. Lo and behold, he rediscovered his journalistic muse, reporting on his bumbling attempts to adapt to country living; He rediscovered his radio voice when a small band of crazed volunteers fired up a community radio station; and he rediscovered his spiritual roots as new friends and neighbors approached Matthew to give eulogies and even preside over the marriages of loved ones.
Who’da thunk it?

Certainly not his long-suffering spouse Donna, who thankfully remains at his side. Nor their puzzled families, who long ago gave up trying to figure Matthew out. Nor their two-and-a-half cats, who are always giving him quizzical looks.

Bucolia: Hijinx in the Hinterlands is now available on Amazon: http://www.amazon.com/Bucolia-Hijinx-Hinterlands-Matthew-Thuney/dp/1519400225/