And To the Republic For Which She Sits

I was part of the Hell No We Won’t Go generation, 1968 when our resistance was focused on forcing the government to end the Vietnam War. We certainly did not invent mass protest, the proverbial petition in boots, but with television, our mass protests spilled into tidy American homes. That was new. In the decades since then, my generation has often been portrayed as comic, tie-dyes, feathers, flowers, stony smiles and peace signs, and our serious efforts antic undertakings. One era’s hard-won conviction is another era’s easy assumption.

And then in January 2017, the notion of a “petition in boots” (as someone smarter than I coined it) took on new meaning. In the weeks since the Women’s March, the impetus—the need, the obligation—for mass protest has become an unrelenting, an almost daily urgency.   I thought such social unrest, such a sense of political emergency as I experienced in my youth would not happen again in my lifetime. But fifty years later, here we are. And by we, I mean not just the graybeards and the grandmothers of 1968, but to quote Elwood of the Blues Brothers: “You. Me. Them.”

As a young person in DC for the 1969 Moratorium March a phalanx of my amigos and I all crashed at a friend’s apartment the night before. With us was the sister of a German friend who was visiting her brother. The morning of the March I was surprised to see her applying foundation makeup, heavily, as if for a party. She must have sensed my prissy disapproval because she tossed me the bottle and said, “Here. You’ll need it. When they gas you, the makeup helps to protect your skin.”

The prospect of gas was never far off. We knew that. As we made our way to the March we walked by government buildings sandbagged against us, prepared for an assault, and National Guardsmen behind those sandbags with rifles and bayonets. A sobering sight. And yet most of the Guardsmen were young people, like us, and several surreptitiously flashed the peace sign.

We were 250,000 strong that day. More than anyone had reckoned on. Certainly more than that pig Nixon had reckoned on, though in calling out the sandbags and the National Guard he knew we were dead serious.   Six months later four protesters were dead. Killed in May, 1970 by the Guard at Kent State and more at Jackson State. Four months later Bobby Seale, a defendant in the Chicago Seven trial, was bound and gagged in the courtroom. At the order of the judge. The Republic stood imperiled, and the rights Americans relied on eroding.

I remember being deep in the crowd the day of the ‘69 Moratorium March, looking up to a platform. Joan Baez sang. Inspiring speakers rallied us. “If Nixon wants to know how to move soldiers peacefully out of ‘Nam,” one guy memorably called out to rousing cheers, “he should ask us!” In fact, aside from brief skirmishes, 250,000 of us did move peacefully into and later out of the city.

However, the image I remember best was wordless. Not far from my cadre of friends a woman had spread a blanket on the grass. She had a couple of little kids with her, a preschooler and a five year old. Other than her children, she was alone, no other adult family members. I was astonished that a mother would bring her little children to a march where there was a threat of violence, of gas, where protesters were surrounded by guys with guns. And yet, she sat there, amid the restless crowd, calmly slathering peanut butter on white bread, handing out sandwiches. The kids sat, cross-legged in front of her, munching, listening. She was an ordinary looking woman, perhaps thirty-five, no outlandish clothes, no feathers or flowers in her hair, no love beads. At odds with the rousing rhetoric, she exuded serenity. Her image seared into memory.

Last month my daughter-in-law took my little grand-daughter to the Women’s March. I was proud of them; I was also glad there was no threat of gas, no armed National Guard. This is not to say there won’t be. Perils lie ahead, of that I am certain. Even so I take heart from the remembered image of that mother at the 1969 Moratorium March. The simplicity of her sitting on the blanket—amid the raucous, impassioned outcry, while the crowd surged and shouted and the National Guard stood armed—calmly handing out sandwiches to her children seemed like an emblem. To me she represented confidence, not simply in the justice of our cause, but confidence in the Republic itself.   That confidence in the republic spurs us now, 2017 to put our boots back on, our petitions into our feet, marching now. You. Me. Them.   In fact, with Elwood and Jake of the Blues Brothers, we might all say, “We’re putting the band back together.” 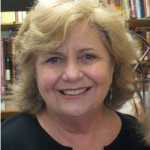 Author’s Bio: One of the original Founding Mothers of Red Wheelbarrow Writers, Laura Kalpakian was nominated for the prestigious International IMPAC Dublin Literary Award for American Cookery. She won a National Endowment for the Arts Fellowship, a Pushcart Prize, the Pacific Northwest Booksellers’ Award (twice), the Anahid Award for an American writer of Armenian descent, the PEN West Award, and the Stand International Short Fiction Competition. She has had residencies at the Virginia Center for the Creative Arts, Montalvo Center for the Arts, and Hawthornden Castle in Scotland. She is the author of thirteen novels and over a hundred stories published in collections, anthologies, literary journals and magazines in the USA and the UK.